At least 29 people have been killed and at least 1,500 injured in the second earthquake to hit Japan in two days.

The earthquake was a powerful magnitude 7.3 quake which was felt across the Kumamoto region on the southwestern island of Kyushu at 1.25am on Saturday local time. It followed a magnitude 6.2 earthquake which hit on Thursday in the same region.

Numerous buildings have collapsed and rescuers were digging through rubble, mud and debris to try and reach those trapped, but continued aftershocks hindered rescue efforts and fuelled fears of more powerful quakes. Thousands of soldiers were being sent to the scene to help.

Kumamoto Prefectural official Tomoyuki Tanaka said the death toll was climbing and at least 80 of the people injured were in serious condition. Nearly 70,000 people have been displaced.

The weather has further complicated the situation, with the tremors and heavy rain setting off landslides.

In Minamiaso village in the Kumamoto Prefecture, a huge landslide tore open a mountainside from top to bottom, completely covering a highway at the bottom.

Eyewitnesses reported seeing a trail of brown earth streaming down the hillside like a muddy river.

Another landslide in the area caused a house to fall into a deep ravine, while other houses were left hanging precariously at the edge of a huge hole which appeared in the ground.

Other houses were swamped by mud and heavy machinery was being used in an efort to recover their inhabitants.

200m long bridge over this gorge has gone. https://t.co/uBKKkx1Jlp pic.twitter.com/MzjdKC6sIR

Japanese TV footage showed a collapsed student dormitory of Tokai University, which was originally two floors, but now looked like a single story building. A witness said he heard a cry for help from the rubble. Two students were reported to have died in the incident. 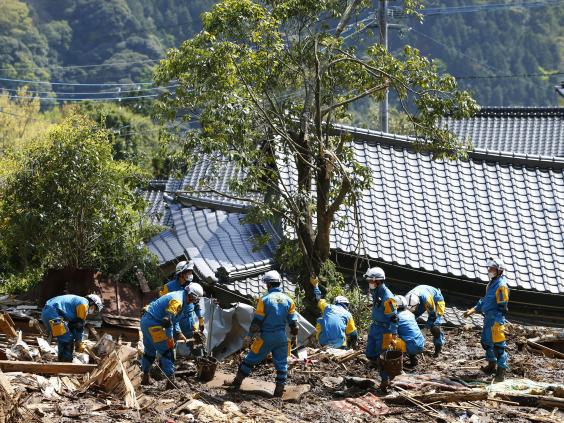 “Nothing is more important than human life and it’s a race against time,” said Prime Minister Shinzo Abe, warning rescue efforts were critical with stormy and wet weather forecast overnight, which could further damage weakened buildings and cause landslides.

“I want rescue activities to continue with the utmost effort,” Mr Abe said at a government meeting after the disaster.

The quake triggered a tsunami advisory which was later lifted and no irregularities were reported at three nuclear power plants in the area, a senior government official said.

The quake also breached the walls of Kumamoto Castle which had previously withstood bombardment and fire in its four centuries of existence. The fortification in the city of Kumamoto has stood as one of Kyushu’s icons ever since it was built in 1607 but television footage on Saturday showed a large section of the stone wall housing the castle collapsed in a dusty heap.

The Japan Meteorological Agency said that Saturday earthquake may have been the main quake, with the earlier one on Thursday a precursor. The quakes’ epicenters have been relatively shallow — about 10 kilometres (6 miles) — and close to the surface, resulting in more severe shaking and damage. Japanese broadcaster NHK TV said as many as eight quakes were being felt an hour in the area.

In addition, a small eruption occurred at a volcano in southern Japan the earthquake, spouting out 100 meters of smoke. However, this volcanic activity is relatively normal for the area and the Japanese Meteorological Agency has kept its alert level at 2, on a scale of 5, for Mt. Aso.

A spokesman for the US government said America was ready to provide “any and all assistance” that might be needed by Japan.

British Prime Minister David Cameron said he was “deeply saddened” by the news and added the UK was “ready to do what it can to support Japan’s response in Kumamoto”.

For: Japan’s earthquake leaves scores dead and over 1500 wounded