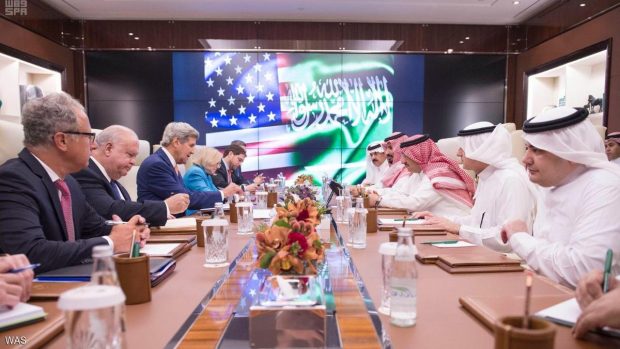 U.S. Secretary of State John Kerry met with Saudi King Salman in the Red Sea city of Jiddah on Thursday ahead of wider talks focusing on the conflicts in Yemen, Syria and Libya with other Gulf Arab officials.

The flurry of meetings come as U.N.-mediated peace talks to bring an end to the nearly 18-month-long war in Yemen were suspended earlier this month. They also fall on the same day that the U.N. human rights chief called for an international investigation of rights abuses and violence in Yemen’s civil war, which has killed more than 9,000 people, including nearly 3,800 civilians, and displaced 3 million.

The U.S. has provided logistical and intelligence support to a Saudi-led coalition of nine Arab countries in their bombing and ground offensive against Shiite Houthi rebels and their allies in Yemen. The Houthis, who are allied with Saudi Arabia’s regional rival Iran, seized the capital, Sanaa, in 2014.

A senior State Department official traveling with Kerry said he was expected to raise U.S. concerns about civilian casualties in Yemen during his meetings in Saudi Arabia. The official spoke on condition of anonymity because he was not authorized to speak publicly about the meetings.

Kerry’s meeting with King Salman lasted roughly half an hour. The two spoke briefly about the monarch’s health and an operation he had in the U.S., apparently for back pain. It was not clear when the surgery was performed.

After his meeting with the Saudi monarch, Kerry wrote on Twitter that they discussed the “need to reach a political solution (and) address the humanitarian crisis in Yemen,” as well as the war in Syria and the fight against the Islamic State group.

Saudi Arabia and other Gulf Arab states back rebels fighting Syrian President Bashar Assad’s forces, and are members of the U.S.-led coalition bombing IS in Iraq and Syria.

He is also set to meet with Omani Foreign Minister Alawi bin Abdullah before a meeting with other Gulf Cooperation Council foreign ministers from Bahrain, Kuwait and Qatar. Oman is the only country of the six-nation GCC that is not part of the Saudi-led coalition in Yemen.

Kerry is scheduled to travel to Geneva next, where he will meet with Russian Foreign Minister Sergey Lavrov on Friday.

The State Department official said Kerry would be giving Gulf Arab states “an update on where things are going in Geneva” regarding proposals to share intelligence and coordinate militarily with Russia against the IS group and al-Qaida. Russia and Iran, however, are strong backers of the Syrian president and have been accused of targeting moderate opposition forces, some of whom are supported by Washington and Gulf Arab states.