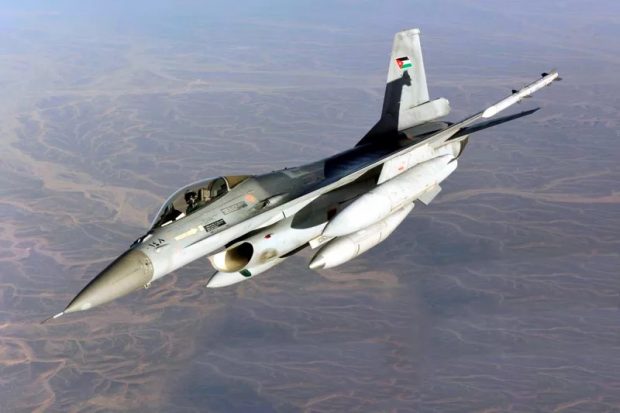 Al-Jazeera – Jordan said late on Saturday that its warplanes bombed positions held by the IS group in southern Syria, two years after one of its pilots was captured and killed by the armed group.

Friday’s strikes came on the second anniversary of IS’s release of video showing pilot Moaz al-Kassasbeh being burned alive in a cage after his aircraft crashed in Syria in December 2014.

“Jordanian Air Force planes, in memory of our martyrs who have fallen in our war against terrorism, on Friday evening targeted various positions of the terrorist gang Daesh in southern Syria,” the military said in a statement, using the Arabic acronym for IS.

It said the strikes against targets including a captured former Syrian army base killed and wounded several IS members and destroyed an arms depot, a car bomb workshop and a barracks.

Jordanian forces used drones and precision-guided munitions in the operation, which was part of the “kingdom’s efforts to eradicate the terrorist group”, it said. The kingdom is part of an international coalition battling ISIL, also known as ISIS, in Syria and Iraq.

The strikes came as an alliance of US-backed fighters began a new phase of its campaign on the ISIL-held city of Raqqa in northern Syria, aiming to complete its encirclement of the group’s stronghold.

The Syrian Democratic Forces, a coalition of Kurdish and Arab factions primarily led by the Kurdish YPG, has been a key ground ally of the US-led coalition in the fight against IS.

For: Jordan’s warplanes bomb IS positions in southern Syria