At least seven people have been killed in a series of apparently random shootings in the Michigan city of Kalamazoo, police said.

Five people were killed at a restaurant and two at a car dealership. A 14-year-old girl was among those killed.

The attacks are being linked to an earlier shooting at a car park, which left one woman seriously injured.

Police have taken a 45-year-old male into custody and said that the threat to the public was now over.

The man did not resist when approached by officers, and weapons were found in his car, police said. 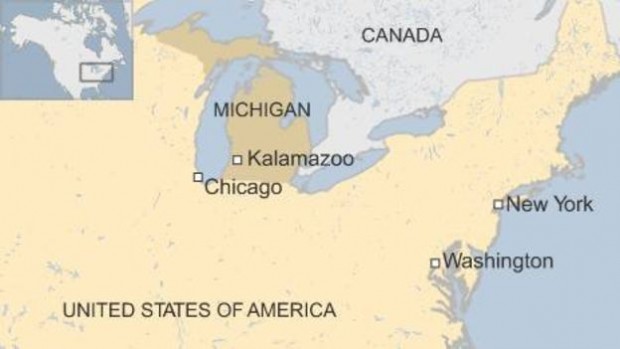 The shootings took place on Saturday evening at three locations – outside a Cracker Barrel restaurant, a Kia car dealership and a block of flats.

Gunfire was also reported at a fourth location near the restaurant soon after,WoodTV reported.

The channel also said that an eight-year-old died at the restaurant, quoting local police.

Police are interviewing the suspect and are yet to determine a motive.

For: Kalamazoo, Michigan: Seven were shot in random attacks