Khalifa Haftar lashes out at Al-Serraj, says Egypt is part and parcel of Libya 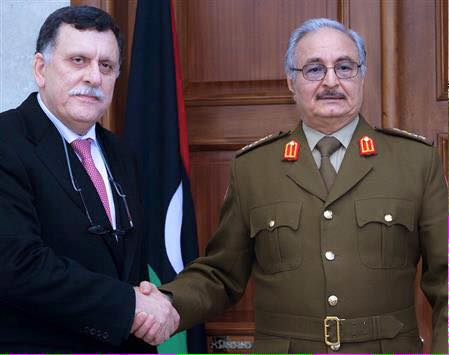 In a televised interview late Tuesday, Khalifa Haftar, the leader of Dignity Operation (Karama) in Benghazi said the Libyan Arab Army will remain so to Liberate Libya and the word Arab is so important and must not be changed.

Haftar said the GNA doesn’t interest him the least and he doesn’t care about the decisions and orders of The presidential council, headed by Fayez Al-Serraj, he said he doesn’t want to waste his time with that government.

Haftar also indicated that he began his operation from the east in Benghazi because the Sun always rises from the east.

“Egypt is part and parcel of Libya, while Chad is playing a key role in protecting our southern borders. However, Tunisia is sending terrorism to us.” Haftar said when asked about his relationship with neighboring countries.

He added that Gaddafi destroyed the Libyan army and NATO destroyed Libya’s air defense system back in 2011.

Talking about war, Haftar said Sirte is easier than Benghazi and Derna, saying he is fighting where fight should be in Libya.

For: Khalifa Haftar lashes out at Al-Serraj, says Egypt is part and parcel of Libya