Kierkegaard on ideals, happiness, and the false allure of the extraordinary 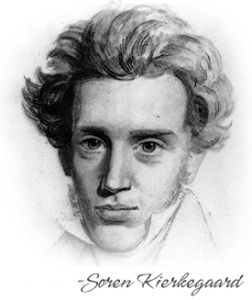 In a diary entry from November of 1846, he writes:

I realize more and more that I am so constituted that I shall not succeed in realizing my ideals, while in another sense, and precisely in the human sense, I shall grow far beyond my ideals. Ordinarily, most people aim their ideals at the Great, the Extraordinary, which they never attain. I am far too melancholy to harbor such ideals. Others would smile at my ideals. It is certainly true that my ideal was simply to become a husband, to live solely for being married. And lo and behold, while I despair of attaining that goal I become an author and, who knows, maybe a ranking author.

I have been content to be regarded as half-mad, though this merely was a negative form of being something out of the ordinary. And this may quite possibly remain my essential form of existence, and I shall never attain the pleasant, becalmed existence of being something very small.

And yet what made Kierkegaard extraordinary, despite his resistance to the notion, was his ability to transmute this resignation into a vitalizing force and to grant both burdens — his irrepressible idealism and his fatalistic melancholy — equal gravity as he marched forward. In another entry from the same year, under the heading “How I understood my whole activity as a writer,” he crystallizes this disposition beautifully:

I have conceived of myself as intent upon standing up for the Ordinary — in a bungled and demoralized age — and making it lovable and accessible to those of my fellow-creatures who are capable of realizing it, but who are led astray by the times and who chase after the Un-Common, the Extra-Ordinary. I have understood my task to be like that of a person who himself has become unhappy and therefore — if he loves human beings — particularly desires to help others who are capable of realizing happiness.

But a true effort at amplifying the happiness of others, Kierkegaard cautions, can’t be a mere vehicle for narcissistic self-gratification:

I have been especially vigilant that my efforts should not be tainted with self-seeking vanity and, above all, that I served Thought and Truth in such a way as not to derive any secular and temporal advantages therefrom. Therefore I know, in all good conscience, that I have worked with true resignation.

In an autobiographical reflection from 1852, under the heading “My life’s course,” Kierkegaard writes:

The Highest is not to comprehend the Highest, but to do it, and note this well, including all the burdens it involves.

For: Kierkegaard on ideals, happiness, and the false allure of the extraordinary