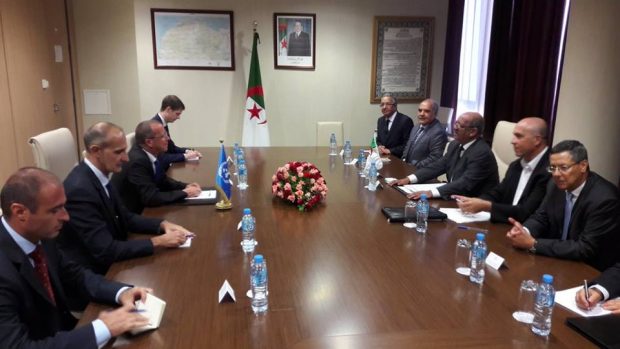 The UN delegate to Libya Martin Kobler hailed Saturday in Algiers the “active” and “constructive” role played by Algeria in the restoration of peace and national reconciliation in Libya.

“I thank Algeria for its active, strong and constructive role” for the restoration of peace and national reconciliation in Libya, Kobler told the press after his meeting with Minister for Maghreb Affairs, the African Union and the Arab League Abdelkader Messahel.

He also welcomed Algeria’s support to Libya and the United Nations Support Mission in Libya (UNSMIL).

Kobler said he had “very intense” talks with Messahel, stating that regular exchange of views on the situation in Libya “is very important.”

He said they broached the fight against terrorism and the situation in Sirte,” he added, stressing that “Sirte will be very soon freed” from the IS.

The UN official said he talked with Messahel about the national reconciliation in Libya, recalling that a meeting on this issue took place on Thursday and Friday, and was attended by one hundred Libyans and international experts, including Algerians.

Kobler highlighted the importance for Libyans to sit around a table and discuss national reconciliation.

For his part, Messahel said that his meeting with Kobler “is part of a series of periodic meetings that enabled us exchange information and analyses and talk about what is currently on the go.”

“We also evoked Algeria’s experience in national reconciliation,” added Messahel who announced the holding of a Libyan political meeting in the upcoming days in Tunis.

Messahel said he reiterated during the meeting Algeria’s position on the Libyan issue, which highlights the “urgency and importance” to implement the Agreement signed in 17 December 2015.

“We are in contact with our partners in Libya so that inter-Libyan dialogue speeds up the implementation of this Agreement that had been hard and patiently reached,” he said.

“We also discussed the security situation in Libya and the involvement of the international community” in the peace process in this country, he added.

Messahel announced the upcoming meetings on Libya in New York “to further involve the international community to back Libya in its process, either through the UN or member countries in the Security Council.”

For: Kobler and Messahel discuss Libyan national reconciliation in Algeria