Kobler denounces siege on Benghazi, Derna civilians, calls for end of summary execution of IS terrorists in Sirte 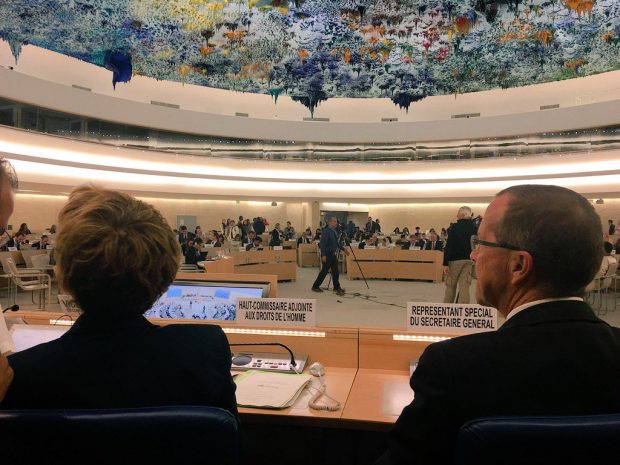 The Head of the UNSMIL, Martin Kobler, said at the Human Rights Council in Geneva that more than 100 families are currently trapped Benghazi in areas of fighting – mainly in Ganfudah, facing constant bombing and shortages of food, medical care and electricity.

Kobler added Wednesday that the UNSMIL has sought to arrange a ceasefire in Benghazi and is supporting local mediation efforts that would allow civilians wishing to leave to do so.

“However, the warring parties have not agreed on the modalities for ensuring a safe evacuation.” Kobler said in front of the world representatives at the Human Rights Council.

Kobler continued by indicating that the multiple armed conflicts raging in Libya continue to directly impact the lives of civilians, pointing out that from March 1st to August 31st, UNSMIL documented 287 civilian casualties, including 141 deaths and 146 injuries. Victims include 30 children killed and 28 injured.

“These numbers reflect only the cases that UNSMIL has been able to document of civilians who were killed or injured in the direct course of fighting. The real figure of civilian casualties is higher.” He told the Council.

In his briefing on the humanitarian issue in Libya, Kobler also pointed out that civilians in Derna are also suffering from shortages of essential items.

Dignity Operation forces led by Khalifa Haftar have been putting a strict siege on Derna disallowing its residents to receive their basic life needs. The siege is frequently coupled with day-to-day airstrikes carried out by Dignity Operation warplanes and other foreign fighter aircraft, especially on western and eastern entrances of the city, according to Derna Shura Council sources.

Kobler also pinpointed the Libyan forces’ battle against IS in Sirte, saying that “reports of summary killings of Islamic State prisoners are of great concern.”

“I welcome assurances that this is not a policy and remind all concerned that the fight against terrorism must be carried out in strict conformity with international humanitarian law.” He stressed, adding that armed groups around Libya continue to carry out grave human rights abuses with total impunity.

“UNSMIL receives daily reports of abductions, arbitrary detention, summary killings, torture and other ill-treatment. This impunity for armed groups must be addressed as a matter of urgency.” Kobler said in a rebuking tone toward those whom he described as “abusive armed groups.”.

“In this context, I visited the Prosecutor of the International Criminal Court in May to offer UNSMIL’s support, and continue to reiterate my call for additional resources to allow the Court to investigate fully international crimes committed in Libya, including since 2011. I also further recall Libya’s obligation to hand over Saif al-Islam Qaddafi to the Court.” Kobler reiterated.

For: Kobler denounces siege on Benghazi, Derna civilians, calls for end of summary execution of IS terrorists in Sirte