Kobler urges west to support Libya’s GNA, asks them to keep the ban on arms 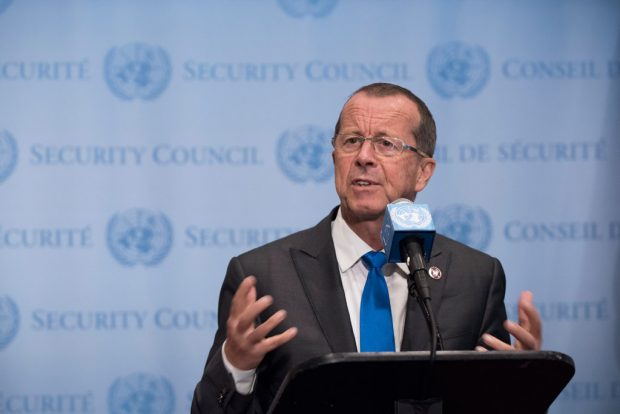 The Head of UNSMIL called on Tuesday on countries to support the Government of National Accord (GNA) of Libya and do more to halt banned arms shipments there.

The UN delegate to Libya, Martin Kobler, also referred to the current “positive signs” of management of Libya’s oil sector and of ensuring that revenues go into the central bank’s coffers.

“But Libya remains plagued by corruption and an absence of the rule of law, marked by “abominable” state-run detention centres holding migrants trying to reach Europe,” Kobler said.

“It is very important that the international community maintains cohesion in order to bring the Government of National Accord to a stage where it can effectively combat the questions on the table,” Kobler told reporters after addressing the U.N. Human Rights Council in Geneva.

Kobler said Libya had 26 million weapons and a population of 6 million. All UN member states must respect the arms embargo – with no guns going to either side, he said.

Neighbouring countries in particular had an interest in preventing any spillover of the conflict, he said.

“This is of course Europeans, but this is also Egypt, Algeria, in particular the south. There is a link between the terrorism in Libya and with Boko Haram in the south.”

But the fact that Libya had one national oil company and one central bank, with slowly rising oil production, was a positive sign.

“This is the lifeline for the Libyan people, that more money comes into the coffers of the central bank in order to improve the imports and to finance salaries and other basic needs and services for the population,” Kobler said.

For: Kobler urges west to support Libya’s GNA, asks them to keep the ban on arms