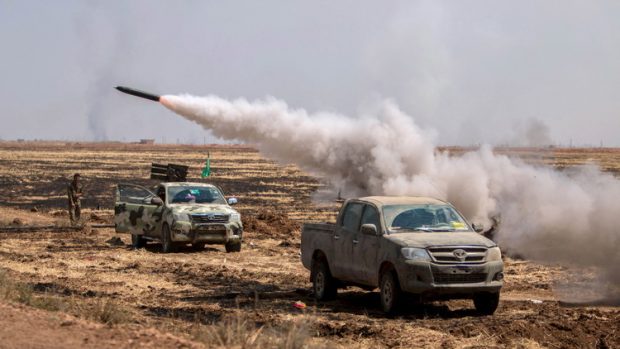 US-backed coalition of armed groups aims to oust ISIL from its de facto capital of Raqqa.

Kurdish-led forces have massed thousands of fighters as part of a military offensive to take over Raqqa, the northern Syrian city controlled by the Islamic State of Iraq and the Levant (ISIL, also known as ISIS) group for more than two and a half years.

The Syrian Democratic Forces (SDF), a US-backed coalition of armed groups led by the Kurdish People’s Protection Units (YPG), said it has mobilised thousands of fighters in the countryside north of Raqqa.

Fighting was reportedly ongoing on Tuesday near Ain Issa, situated 55km from the ISIL-controlled city.

SDF released a statement declaring its goal of “liberating” Raqqa from ISIL, which has ruled the town with an iron fist, committing atrocities against the civilian population.

The US-led coalition against ISIL was supporting the offensive, spokesman Steve Warren said.

“We have always been focused on evicting ISIS from Raqqa and we will continue to support the SDF as they conduct ground operations to further isolate the city,” the colonel said.

“The US-led coalition will continue to provide air support for SDF operations against ISIS.”

For: Kurdish-led Syrian Democratic Force kicked off war on Syria’s ISIS in Raqqa