Libya: An alternative proposal is not expected to gain traction 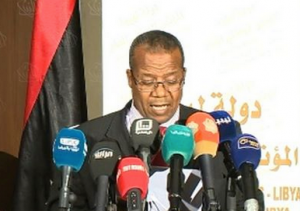 A high-ranking member of Libya’s Tripoli-based parliament the General National Congress has denied that his body was behind a fresh peace deal, saying that the initiative did not represent the GNC.

Mahmoud Aziz told Middle East Eye that the proposal, announced on Tuesday and dubbed an alternative “Libyan-Libyan” alternative to the UN-brokered road map was “an individual initiative that does not represent the GNC”. Aziz, however, declined to specify which GNC member or members were behind the deal.

After more than a year of division, a majority of delegates Libya’s two rival parliaments – one based in Tripoli and the other to the east in Tobruk – signed an UN-brokered road map for the Government of National Accord (GNA) earlier this month. But the presidents of both the GNC and its rival government the House of Representatives refused to sign the deal pushing analysts to wonder if the UN-plan could succeed and whether or not opponents would move to undermine it.

The newly-tabled Libyan-Libyan plan was announced by Abdel Qader Huweili a member of the GNC’s recently formed Political Committee Abdel Qader Huweili, who said the plan was to announce the legal drafting of the constitution, and to hold legislative elections to end the country’s current crisis.

According to Huwili, the alternative proposal intends to form a new temporary legislative body composed of GNC members and 100 tribal leaders from the eastern region. Huweila said that the latter would be selected through the sponsorship of the tribes “to maintain the Libya unity”.

But analysts have already questioned whether the Libyan-Libyan proposal could gain traction especially with the HoR parliament.

Mattia Toaldo from the European Council on Foreign Relations said that he doubted that the alternative will be preferred over the UN proposal, as the latter has been gaining momentum over the past few days.

“I think the strength of an alternative format would be probably in Tripoli although even there, there are lots of signals there that militias are siding with the UN government,” Toaldo told Middle East Eye.

“I don’t see where a Libyan-Libyan so-called track would gain any significant traction although one must take into account that the UN track was tarnished by Leongate, so many Libyans are wary of that, regardless of its outcome.”

Leongate refers to the scandal of former UN envoy to Libya Bernadino Leon, who through leaked emails was revealed to have been working with the UAE to back the HoR side in the Libyan conflict.

The UN-brokered GNA states that a unity government between the two rival parliaments should be formed within a month on the 17 December signing. A nine-member presidential council has already been filled.

“There should be a debate in the House of Representatives this week about the GNA and that’s going to be a crucial element of the puzzle because if the HoR is not supportive somehow then the UN deal cannot work because it is predicated on the HoR [functioning] as the main legitimate authority,” Toaldo said.

The oil-rich country has had rival administrations since August 2014, when an Islamist-backed militia alliance overran Tripoli, forcing the HoR government to take refuge in the east.

In the political vacuum of having two parliaments vying for legislative authority, militants claiming association with IS have emerged across the country. Sirte, the birthplace of Gaddafi, is home to a group of militants that now claim the town as IS’s Libyan capital.

For: Libya: An alternative proposal is not expected to gain traction