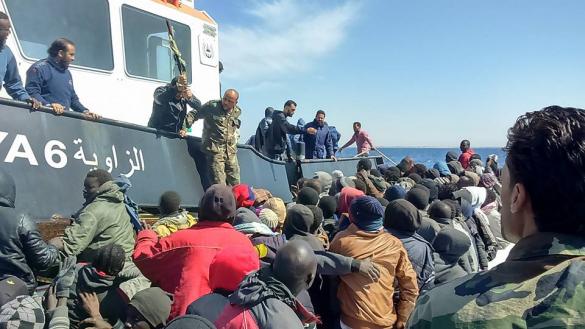 The coastguard “intercepted three large dinghies off the coast of Sabratha” around 70 kilometres (45 miles) west of Tripoli, Colonel Ayoub Qassem, a spokesman for the Tripoli government’s navy, said.

He said all the migrants were from Africa, adding “there were 80 women including some who were pregnant.”

The colonel rejected a statement from French Defence Minister Jean-Yves Le Drian on Thursday that some 800,000 migrants were in Libya hoping to cross to Europe.

“The number is exaggerated,” he said.

Libya has long been a stepping stone for migrants seeking a better life in Europe, with Italy some 300 kilometres (185 miles) across the sea.

People smugglers have stepped up their lucrative business there in the chaos that followed the 2011 ouster of longtime dictator Moamer Kadhafi.

European leaders fear that a deal with Turkey to tackle the EU’s worst ever migrant crisis will increase crossings attempts from Libya.