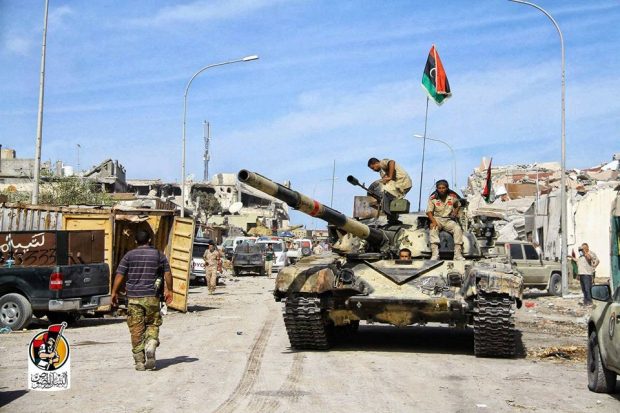 Reuters -Libyan forces in the final stages of a six-month campaign to recapture Sirte from Islamic State said they freed 14 civilians on Sunday from a small residential area where some militants are holding out.

The forces, composed of fighters mainly from Misrata, say they are exercising caution to limit casualties to civilians who may still be trapped with Islamic State fighters.

Islamic State took full control of Sirte, a city of some 80,000 inhabitants, in early 2015. Its loss would leave the jihadist group without any territorial control in Libya.

The Libyan forces have the remaining militants in Sirte surrounded in part of the Ghiza Bahriya neighborhood. The civilians who left on Sunday were Libyans and mainly women and children, the media office of the Misrata-led operation said.

They are the latest of several groups of civilians to escape or be released, many of them migrant women and children who were kidnapped by Islamic State as they tried to make their way through Libya toward Europe.

There was no advance against Islamic State on Sunday, Rida Issa, a spokesman for Misrata-led forces, told Reuters. On Saturday, Reuters reporters witnessed heavy tank and howitzer fire against militant positions resulting in small gains.

For: Libyan forces free 14 civilians from IS as they near victory in Sirte