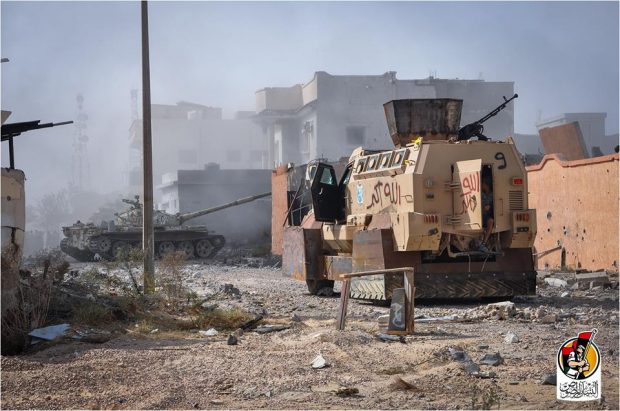 The media office of the Misurata-led forces of Al-Bunyan Al-Marsous confirmed Sunday that the forces are making huge advances into the last hideouts of the IS terrorists in Sirte.

“Our forces have gained Al-Manara neighbourhood in the southern frontline after they disconnected the 600 Buildings neighbourhood from nearby seaside Jizah district.” Said one official at the media office of the UN-brokered Presidential Council’s operation Al-Bunyan Al-Marsous.

“Our forces have also managed to successfully position themselves in the eastern frontline after the disconnection of the two neighbourhoods.”

Relevantly, Misurata Central Hospital said one fighter from the Libyan forces was killed while 10 others were injured and arrived at the hospital after clashes with IS militants on Sunday.

On the other hand, a group of Sawawa residents killed Saturday 5 IS militants who were lurking in the district since last Saturday after clashes ended, Al-Bunyan Al-Marsous media office has reported.

The killing of those five IS radicals add to the other 80 militants whom the media office of Al-Bunyan Al-Marsous said its Misurata-led forces had managed to kill them in an all-out offensive they carried out on the seaside Jizah district on October 3rd.

The media office added then that out of the 80 IS killed militants, there were 25 ones who were killed in an offensive on Al-Manara Campo neighbourhood.