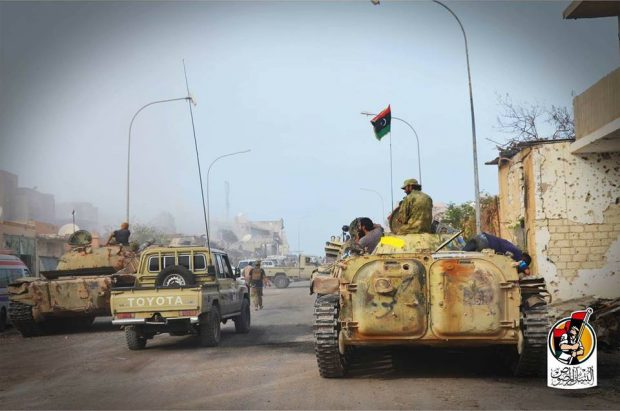 The Libyan forces of Al-Bunyan Al-Marsous operation, which is appointed by the UN-brokered Government of National Accord, said they had advanced on the last area in Sirte in which the remnants of IS militants are trapped.

In a statement issued by the leadership of Al-Bunyan Al-Marsous on Monday, the Libyan forces were reported as going inside Jizah seaside district and covering all of its fight axes to leave the remnants of IS radical group trapped in its desperate attempt to break out of the fully liberated city of Sirte.

IS militants have been in control of Sirte since the beginning of 2015.

The UN-brokered GNA launched last May a liberation battle led by Misurata brigades and other appointed Libyan forces to uproot IS from the city. The operation, Al-Bunyan Al-Marsous, fought IS from three axes, Ajdabia-Sirte, Jufra-Sirte, and Misurata-Sirte.

Of course, the fight against IS in Sirte was assisted later in August by a US air cover as the American fighter aircraft started their airstrikes on the radical groups helping the ground troops of Al-Bunyan Al-Marsous to advance and trap IS militants in a very small area in Jizah neighborhood.

Earlier in February, before Sirte battle had started, the US conducted an airstrike on Sabrataha city killing over 50 IS militants, who were hiding in a compound in the city that lies 70 km away from Tunisia.

For: Libyan forces say they encircled IS militants in their last spot in Sirte