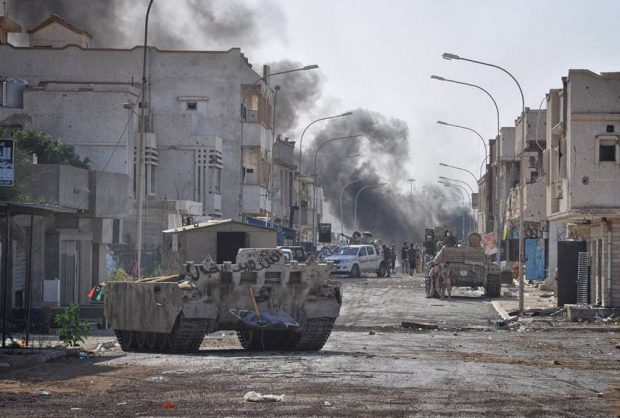 The media office of Al-Bunyan Al-Marsous said its Misurata-led forces had managed on
Sunday to kill more than 810 IS terrorists in an all-out offensive they carried out on their last hideouts in Jizah district that overlooks the sea in Sirte.

In a press release, the media office added that its forces stepped up the fight on the remnants of IS militant group in Al-Manara Campo, Jizah district, and 600 Buildings neighbourhood, pointing out that IS radicals suffered great loss of both fighters and positions.

The media office also added that out of the 80 IS killed militants, there were 25 ones who were killed in an offensive on Al-Manara Campo.

Yesterday evening, the media office of Al-Bunyan Al-Marsous revealed that its forces lost 8 fighters in the fight on the outskirts of neighborhood 3 in Sirte against IS militants, in addition to more than 50 injuries.

It also confirmed that a Dutch photojournalist, Jeroen Oerlemans , was killed in the Sunday clashes. Akram Gliwan, the spokesman of Misurata Central Hospital, told AFP that photographer Jeroen Oerlemans was “shot in the chest by an IS sniper while covering battles in Sirte” 450 kilometers (280 miles) east of Tripoli.

For: Libyan forces say they killed 80 IS militants in Jizah district, Sirte