Libyan forces seize key positions from IS in neighbourhood (3) Sirte 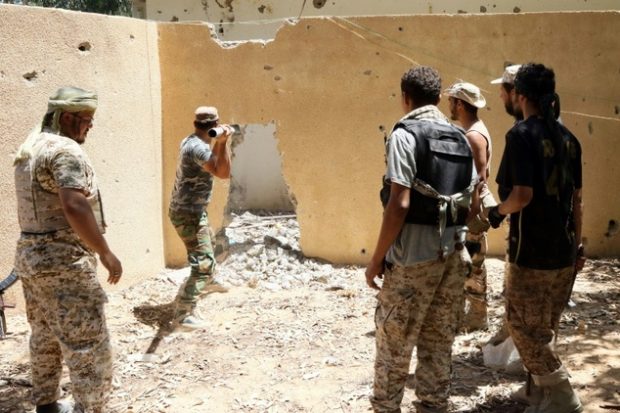 The media office of Al-Bunyan Al-Marsous operation, which is appointed by the Government of National Accord (GNA), announced advancing into more parts of the last IS hideout in Sirte, neighbourhood (3).

The Misurata-led forces captured Tuesday the building of the civil court and the savings bank where IS snipers used to position themselves before being pushed out, the media office added.

“Over seven IS killed terrorists were found in the surrounding of the bank.” senior leaders from Al-Bunyan Al-Marsous reported.

The media office also reported that they also seized an ammunition stock filled with mines, explosives and warheads.

On Monday, the Misurata-led forces took hold of the seaside Jizah naighbourhood after heavy clashes and became inches away from the last nooks inside which IS militants are holed .

The media office posted Monday photos showing the Jizah neighbourhood and showing the advance of the Misurata-led forces.

The photos also show the Wihda Bank branch, which was freed from IS at the beginning for this week after being used as a hub for IS snipers.

IS took control of the city in 2015 and claimed it to be their capital of the self-proclaimed state in North Africa, yet in May 2016, forces loyal to the Government of National Accord waged war on the radicals in a bid to free the city and have now besieged the remaining of them in some parts in their last hideout – neighbourhood 3.

For: Libyan forces seize key positions from IS in neighbourhood (3) Sirte