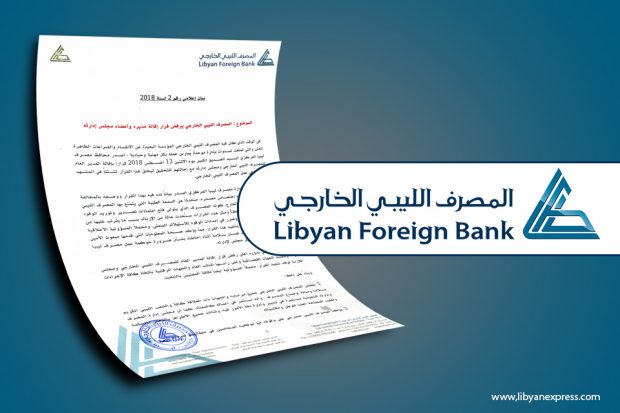 The Libyan Foreign Bank (LFB) has issued a statement denouncing the decision taken by the Governor of the Central Bank of Libya (CBL) Al-Sediq Al-Kabeer to dismiss the General Director of the LFB and the board of directors as well as to place them under investigation.

The LFP said on Tuesday that the decision made by the CBL in Tripoli created a confusion on the scene.

“As the LFB is the one that opens letters of credit for exporting and importing oil, such a dismissal would complicate matters and stain the reputation of the LFB.” The statement reads.

“This new ill-founded decision is line with the information provided by the Head of the UNSMIL Ghassan Salame in his recent briefing to the Security Council about the need to administrate the work of the CBL by appointing a board of directors.” It adds.

“LFB stands in commitment with the personnel who justly condemn the dismissal decision. The personnel sent letters to the Audit Bureau and the Attorney General telling them of their rejection of the decision.” The statement further indicates.

It also said that all the transactions done by the LFB and signed by its General Director are audited, saying the LFB is in very good conditions and as of July 31, 2018, the LFB had cash rates of about 98% among other improvement and stability indicators.

“The LFB General Director and personnel all reject the decision made by Al-Kabeer as he is not entitled by law to dismiss the LFB board of directors or any other Libyan banks’ administrations.” The statement adds.

The LFB calls on the concerned authorities to look into the legal context by which the decision by the CBL was taken and thus allow the LFB personnel to return to work as normal for the best interests of all Libyans.

The views expressed in Op-Ed pieces are those of the author and do not purport to reflect the opinions or views of Libyan Express.
How to submit an Op-Ed: Libyan Express accepts opinion articles on a wide range of topics. Submissions may be sent to oped@libyanexpress.com. Please include ‘Op-Ed’ in the subject line.
CBLLibyaLibyan Foreign Bank
Share
Submit a Correction
Sign up for our Newsletter.