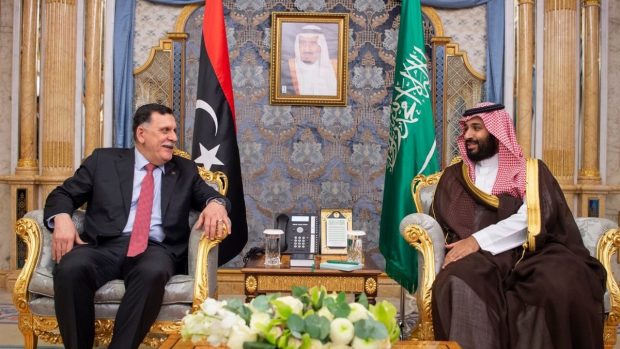 Bin Salman reportedly made the remarks after meeting with Fayez al-Sarraj, head of Libya’s internationally-recognized Tripoli-based government, in Riyadh.

According to a statement issued by bin Salman’s media office, the two men discussed recent developments in Libya and the two countries’ bilateral relations.

“The stabilization of Libya will have a positive impact on Libya’s neighbors — and the entire region — and will encourage greater cooperation,” the statement quotes the crown prince as saying.

Al-Sarraj, for his part, hailed the “strategic relationship” — and close historical and cultural ties — between the two countries.

“Our goal is a democratic, civil state,” he said. “This requires strong regional and international support.”

Al-Sarraj also welcomed what he described as Saudi Arabia’s “strong support and initiative in this regard”.

At the meeting, the two men agreed to step up bilateral coordination, especially in the fields of security, economy and development.

The views expressed in Op-Ed pieces are those of the author and do not purport to reflect the opinions or views of Libyan Express.
How to submit an Op-Ed: Libyan Express accepts opinion articles on a wide range of topics. Submissions may be sent to oped@libyanexpress.com. Please include ‘Op-Ed’ in the subject line.
LibyaSaudi Arabia
Share
Submit a Correction
Sign up for our Newsletter.