The Central Bank of Libya (CBL) has announced the continuation of 2017 decision to allow Libyan families to buy dollars for the official bank rates with each family member getting 500 dollars in 2018 instead of 400 that was in 2017.

The decision was issued on the CBL’s official website Thursday, saying the decision will take effect starting January 15, 2018.L’s Governor Al-Siddiq Al-Kabeer, knowing that the CBL is currently under the spotlight after the recent decision by the Tobruk parliament to appoint a new governor.

WHO ranks Libya as a high-risk country amid Coronavirus outbreak 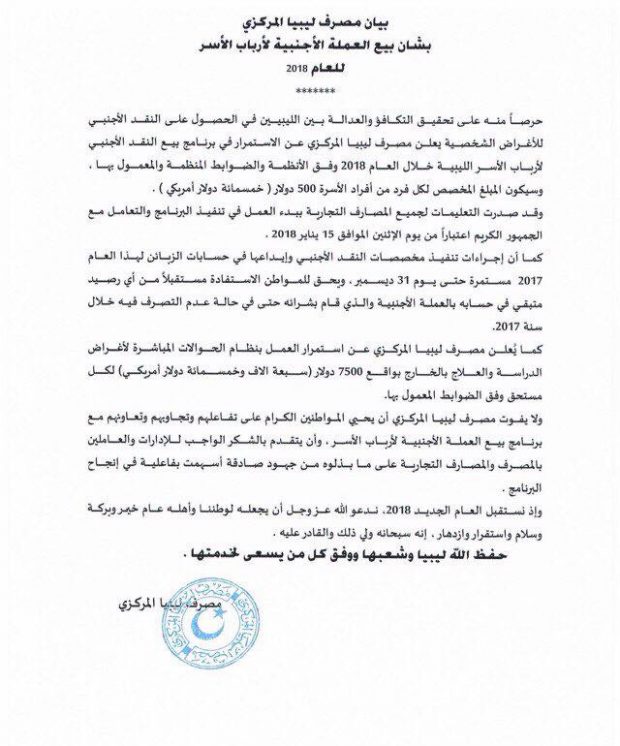 Tobruk-based House of Representatives appointed Mohammed Al-Shukri as a new CBL governor on Tuesday by 54 votes, saying he is the rightful governor of the sovereign financial institution of the oil-rich company.

However, Al-Kabeer rejected the appointment and rendered it illegal as it violates the Libyan Political Agreement Artcole 15, which says the HoR must consult the High Council of State in Tripoli in selecting the sovereign posts’ incumbents.

WHO ranks Libya as a high-risk country amid Coronavirus outbreak