Make Libyans pay for bombing them

President-Elect Joe Biden has made the much-celebrated decision of having an all-female White House Communications team and named Neera Tanden his pick for the office of Budget and Management.

However, Neera Tanden, the president of the Center for American Progress has previously expressed some controversial opinions in regards to the Libyan crisis and the country’s oil reserve, echoing much of the same sentiment out-going President Donald Trump had expressed.

In an email released to the media titled “Should Libya pay us back?” Tandon said that it is unfair that the US continues to struggle with domestic problems for the sake of aiding in other countries’ war and crises, referring to the NATO intervention in the 2011 revolution against Colonel Muammar Al Gaddafi, an intervention Biden voted against.

Tandon also reaffirmed former president Trumps’s sentiments of making Libya, an oil-rich country pay America back for the bombing that took place during the revolution, insisting that Libyans should be forced to turn over large portions of oil revenues if they want American aid in any future wars or disasters.

Tandon elaborated by saying that in the age of deficit politics, if not paid back for their intervention, financial cuts will have to be made to other vital programs that help the American people such as Medicaid and Head Start to make space for other countries’ wars. 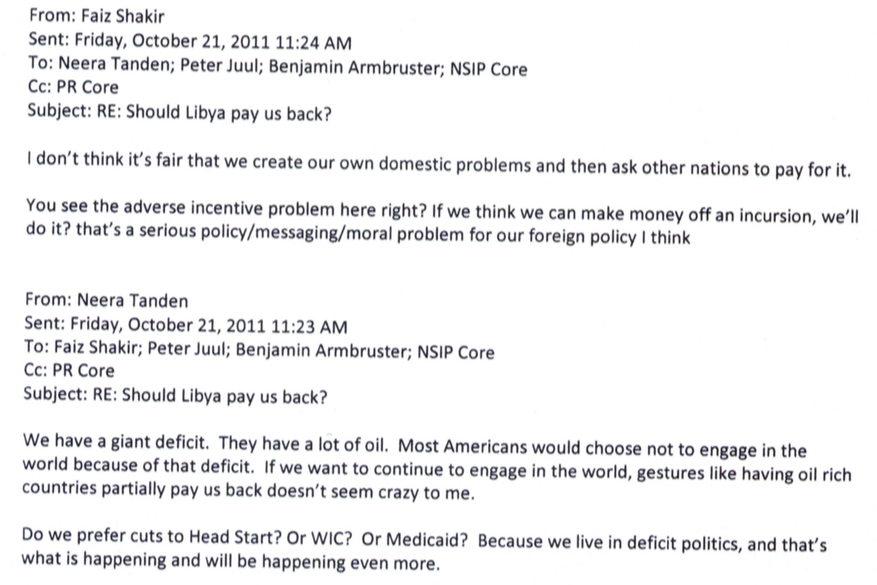 The views expressed in Op-Ed pieces are those of the author and do not purport to reflect the opinions or views of Libyan Express.
How to submit an Op-Ed: Libyan Express accepts opinion articles on a wide range of topics. Submissions may be sent to oped@libyanexpress.com. Please include ‘Op-Ed’ in the subject line.
Donald TrumpFebruary 2011Joe BidenLibyaNeera TandonNOCOil
Share
Submit a Correction
Sign up for our Newsletter.

For: Make Libyans pay for bombing them