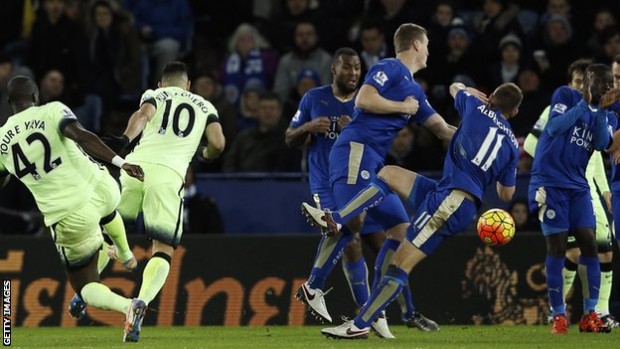 Leicester City missed the chance to return to the top of the Premier League as they played out a goalless draw with Manchester City at the King Power Stadium.

Claudio Ranieri’s side can take great heart, however, from a highly impressive response to only their second league defeat of the season at Liverpool on Boxing Day – but Arsenal stay top on goal difference.

Leicester and Manchester City both had chances in an entertaining encounter, with goalkeepers Kasper Schmeichel and Joe Hart excelling with a succession of saves.

Man of the moment Jamie Vardy missed Leicester’s best chance when he shot over the top after racing clear in the first half while the normally lethal Sergio Aguero was off target from inside the six-yard box as both sides pushed for the win.

Aguero’s frustrating season continues as he was replaced by Wilfried Bony after just 62 minutes with Manchester City pressing strongly for a breakthrough.

The 27-year-old Argentine is a striker of undisputed world class but his edge has been blunted by a succession of niggling injuries that have interrupted his season.

Aguero has scored seven Premier League goals this term – and five of those came in the space of 20 minutes in the 6-1 win against Newcastle United at the Etihad in early October.

He had a couple of opportunities here, none better than when he stole in on a corner seconds after the break but his touch was too heavy at the near post and he was well off target.

Aguero is a player of such quality that it is only a matter of time before the brilliance returns but he seems to be struggling for full fitness – and as City search for the victories that will give them consistency, it is a vital missing ingredient.

Leicester not going away

It is the question that has been asked all season – how will Leicester City react to a defeat?

After the 1-0 defeat at Liverpool on Boxing Day, the visit of Manuel Pellegrini’s expensively assembled squad was both a test and an opportunity.

They answered the question emphatically with a performance bursting with spirit and energy, roared on by the trademark vibrant atmosphere at a packed King Power Stadium.

This was a night when Ranieri’s undercard once again came to the fore and outshone the pair he calls “the pinnacle of the iceberg” – Vardy and Riyad Mahrez.

N’Golo Kante, a £5.6m summer signing from French club Caen, has been winning plaudits and he looked a bargain again here.

Kante almost broke the deadlock with a flashing 25-yard shot just wide then showed remarkable pace to catch Raheem Sterling in a footrace to stop a City attack.

Wes Morgan was once again a powerhouse in defence alongside Robert Huth, while Christian Fuchs ran a marathon down the left, almost creating a first-half goal for Marc Albrighton with a superb cross.

Vardy and Mahrez deserve every headline written about them this season – but there is much more going on under the pinnacle of the Leicester iceberg.

While Manchester City may be formidable at home, there is a missing link away from home that is undermining their chances of taking the Premier League title back from Chelsea.

This goalless draw leaves their league away record this season as won three, drawn three and lost three with eight goals scored and eight conceded – not title-winning form.

City’s last away league victory was at Crystal Palace on 12 September after starting with impressive victories at West Bromwich Albion and Everton.

There is still time to put it right – but the lack of punch away from home must be a concern for Pellegrini because it is often on travels where titles are won.