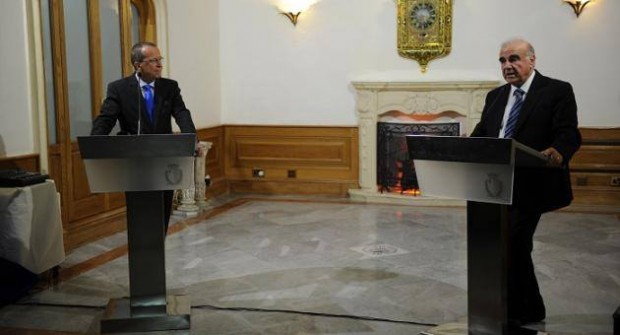 The UN delegate to Libya, Martin Kobler, likened the current situation in Libya to a “truck driving without a license” saying that the entire country is “at a stalemate” where there needs to be an “immediate transfer of power” to a government of national accord in order to address the ever-worsening state of the country.

In a press conference Sunday with the Ministry for Foreign Affairs in Malta just before a meeting of European Foreign Ministers, including Minister George W. Vella, Kobler said the best way to tackle the issue of Libya is convincing the Libyan authorities to move towards forming a government of unity to address the ever exacerbating conditions in Libya.

The first issue highlighted by Kobler was the fact that ISIS is expanding progressively and daily due to the fact that, unlike legal governments, they do not meet and discuss their next move for weeks on end; they simply act. This issue also focuses on the fact that this should not be a fight fought be foreign military forces, but there needs to be a united Libyan intervention which can only be done once a stable government is established.

The second issue is the serious humanitarian issue where Libyan people are sick of living in a country where they cannot send their children to school without fear of kidnapping or worse. The hospitals have no medicine and salaries are getting lower and lower with time. Apart from that, there are thousands of internally displaced Libyan people, as well as a massive food shortage in the country as well.

This also links heavily to the third issue mentioned which is the economic situation in Libya where people simply do not have the money to live any more. Libya went from a country where people could make an honest living to a country where there is almost no money left in the Central Bank, which is also being affected by the falling oil prices.

On the other hand, Minister Vella said that “things are almost at the point of no return” with the ever-looming threat of ISIS expansion getting worse. The Minister also stated that there needs to be a legal government to manage the entire country better and focus on security.

He also gave full support to the UN Support Mission in Libya pointing out that “the most important aspect is the urgency of the matter itself.”

For: Martin Kobler: Libya “a truck driving without a license”, ISIS surging