Mass killings continue in Aleppo, Russia, US sit to include Aleppo under ceasefire truce 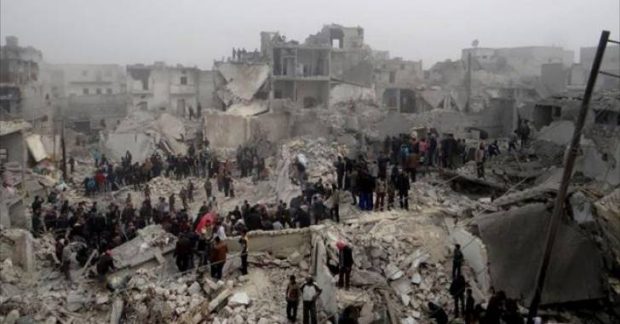 Options are on the table for the US and Russia to advocate a ceasefire in volatile Aleppo in Syria as efforts are on to thoroughly implement the truce. In a fresh bid to halt fighting in the war-torn country, US Secretary of State John Kerry is in Geneva to hold talks with all parties concerned.

The topmost priority of the negotiations is stopping the fighting in the northern province of Aleppo, which was once the country’s commercial capital. The Arab League is also mulling to discuss the situation.

In the last 10 days, more than 250 people have been killed in Aleppo with pro- and anti-government forces refusing to back down. According to the Syrian Observatory for Human Rights, 40 children were killed in the violence. While anti-Assad rebels shelled government-controlled towns, forces loyal to Assad dropped barrel bombs in several parts of the province

Kerry is expected to talk to not only UN special envoy Staffan de Mistura, but also foreign ministers of Saudi Arabia and Jordan. The Geneva talks are also being threatened as vital opposition groups warn of withdrawing.

“We are talking directly to the Russians, even now,” said Kerry upon his arrival in Geneva and added, “These are critical hours. We look for Russia’s co-operation. We obviously look for the regime to listen to Russia and to respond to the international communities’ powerful statement to the UN Security Council.”

For: Mass killings continue in Aleppo, Russia, US sit to include Aleppo under ceasefire truce