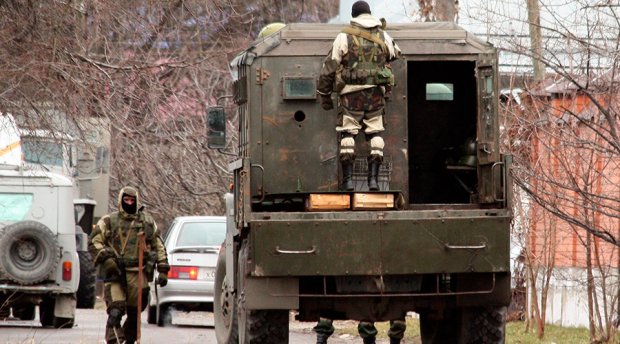 A special forces raid in St Petersburg and an attack by gunmen near Moscow have left at least six suspected militants dead, officials say.

Four were killed at a block of flats in St Petersburg, as special forces searched for North Caucasus militants.

Later, two gunmen suspected to be from the North Caucasus injured two traffic police officers east of Moscow before being killed by security forces. Russia has been battling a long and bitter insurgency in the region.
‘Firearms and axes’

It added: “Criminals were destroyed by return fire when they attempted to resist.”

Reports said a number of arrests had also been made at the block of flats. Images showed balaclava-clad officers surrounding the block on the outskirts of the city. In the later incident, two gunmen attacked traffic police on the Shchelkovskoye highway in Balashikha, 20km (12 miles) east of Moscow.

Police were investigating whether the men were from the North Caucasus. A spokesman for the Russian Investigative Committee told the Tass news agency: “Two policemen were wounded in the attack. One of them is in a serious condition.

“The attackers had firearms and axes. One of them was shot dead by the police during the attack and the other was killed when he was resisting arrest.”

A police source told Tass one of the traffic police officers had died but this has not been confirmed. Security operations against militants are common in the North Caucasus region itself but are rarer in major cities outside.

The insurgency in North Caucasus followed two bitter separatist conflicts in Russia’s Chechnya republic and has occasionally spilled over into violence in other parts of Russia.

For: Militants cell killed in Moscow by Russian special forces