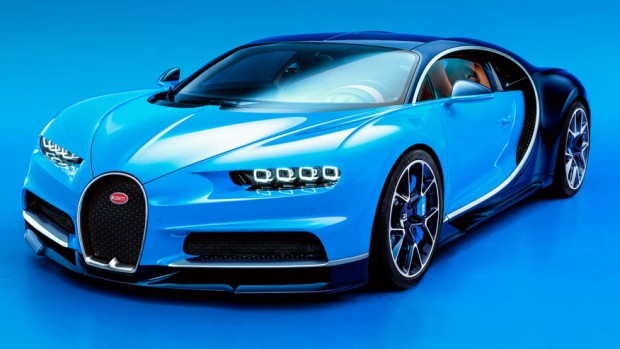 The Bugatti Chiron is the automaker’s $2.5 million successor to the Veyron Super Sport, which holds the Guinness World Record for fastest production car at 268 mph.

Like the Veyron, the carbon fiber Chiron is powered by an 8.0-liter quad-turbocharged 16-cylinder engine, but it puts out nearly 1,500 horsepower, compared to the Super Sport’s relatively measly 1,200 hp. No mass-produced production car has ever come close. Twin fuel injectors for each cylinder help feed the beast, which breathes through six catalytic converters.

Bugatti says the Chiron will be limited to 260 mph for road travel, but that it is also “ready for a new world speed record.” The Veyron was similarly restricted to 258 mph for use on the street, so this suggests plans for a record run with the electronic nannies turned off.

Acceleration is touted to be similarly impressive, with a 2.5-second 0-60 mph time and a 0-186 mph time in “under 13.6 sec.,” which is a significant figure, because it would beat the Hennessey Venom GT’s Guinness World Record of 13.63 sec.

The Chiron features an adaptive suspension system to enhance its ride and handling, along with active aerodynamics that includes a movable rear wing that can make the car slipperier for top speed runs, or increase downforce for better traction in turns and under braking.

The Chiron shares a clear family resemblance with the Veyron, but adopts a few styling cues that hearken back to the classic Type 57, including its small central fin and semicircular side panels, here doubling as air intakes.

Bugatti plans to build 500 Chirons, and you’d better hurry if you want one. A third of the run was sold to the brand’s loyal customers before the car’s public reveal.