No more manspreading in the subways

Men spreading their legs into others’ space is taking place on public transport systems all over the world. It takes many forms, some slight, others severe. “Manspreading” is the now official term, and thanks to an anti-manspreading campaign in New York, it’s something that’s recently gained a lot of traction.

Signs reading “Dude…stop the spread” have been rolled out on train and metro carriages across the city as part of an effort to improve train etiquette.

As you can imagine, the reaction has been mixed. Many have said they’d like a similar policy in their city (Philadelphia has similar signs, and Toronto’s considering it too). But some men aren’t happy about the prospect of closing their legs. As the anti-manspreading lobby gains momentum here and abroad, here are a few answers to some commonly aired concerns.

“I need to sit that way because of my balls”

Sitting cross-legged or with legs jammed together may be uncomfortable for some men: fair enough. But there’s a difference between sitting with your legs together and spreading them at an obtuse, 120 degree angle.

Some of the men on the Tumblr blog dedicated to the problem (Men Taking Up Too Much Space on Trains) look positively uncomfortable – like they’re doing a sitting-down plié or a yoga position. 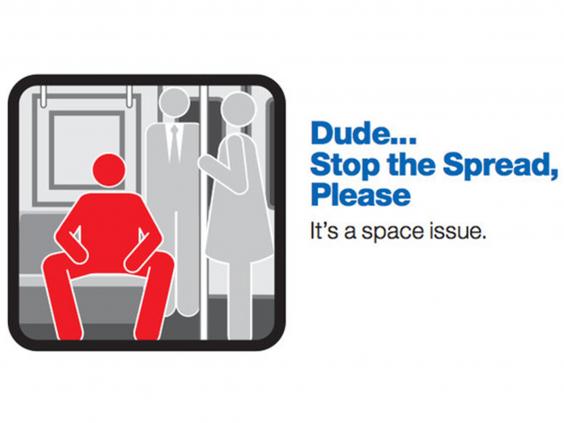 “Women put their handbags on seats all the time”

…but if you asked them to move it, they probably wouldn’t reply with “I need it to be there because of my vagina”. In my experience, they’re also unlikely to invade your personal space with a bag if you’re already sitting next to them.

People do annoying stuff on public transport all the time, but men with spread legs can be found in pretty much any train carriage. But unlike the perpetrators of most transport faux pas, it’s awkward to ask them to stop — you’re risking a lengthy debate on the state of a stranger’s genitalia, and how comfortable it may or may not be.

“What would you feminists say if we were policing your bodies on public transport?”

Well, actually, people police womens’ bodies all the time. Ever heard of the Facebook group “Women who eat on Tubes”? Or the male online commenter who asked “Why do women get to breastfeed in public but we can’t sit with our legs wide open?” in response to New York’s manspreading policy. Which brings me to my next question…

“Why do women get to breastfeed in public but we can’t sit with our legs wide open?”

Are their breasts touching your knees, or taking up an extra seat? Is anyone forcing you to watch? No? Then the point’s kind of irrelevant.

Beyond the obvious argument — that it’s annoying for everyone, not just women — some commentators have argued that this space-taking mirrors other types of male space-taking in society, such as space in boardrooms, or on reading lists and panel shows.

Spreadeagled poses in humans and animals have always been used to assert dominance, and are most often displayed by men. On the other hand, women are expected to adopt meeker, more subservient postures.

If you don’t believe me, then try spotting a woman with her legs spread on the Tube; or imagine the reaction from men if “womanspreading” became a thing (with this video, where a spread-legged woman is stared at and photographed, you don’t have to).

“But it’s my human right to sit how I want!”

As the saying goes, your rights end at the tip of my nose; or, in this case, the edge of my seat.

For: No more manspreading in the subways