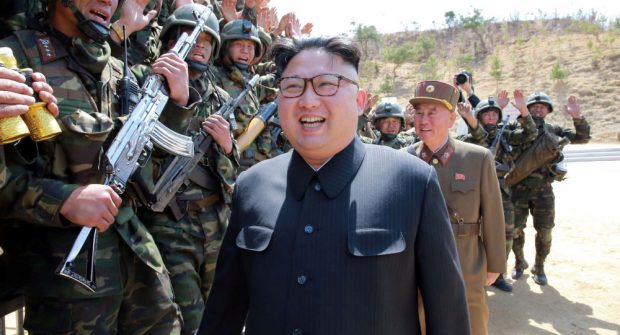 North Korea displayed what appeared to be new long-range and submarine-based missiles on the 105th birth anniversary of its founding father, Kim Il Sung, on Saturday, as a nuclear-powered U.S. aircraft carrier group steamed towards the region, Reuters reported.

Missiles appeared to be the main theme of a giant military parade, with Kim’s grandson, leader Kim Jong Un, taking time to greet the commander of the Strategic Forces, the branch that oversees the missile arsenal, Reuters added.

Goose-stepping soldiers and marching bands filled the square, next to the Taedonggang River that flows through Pyongyang, in the hazy spring sunshine, followed by tanks, multiple-launch rocket systems and other weapons, Reuters explained, adding that single-engine propeller-powered planes flew in a 105 formation overhead.

Unlike at some previous parades attended by Kim, there did not appear to be a senior Chinese official in attendance. China is North Korea’s lone major ally but has spoken out against its missile and nuclear tests and has supported U.N. sanctions. China on Friday again called for talks to defuse the crisis, Reuters added.

Weapons analysts said they believed some of the missiles on display were new types of intercontinental ballistic missiles (ICBM), according to Reuters.

The North has said it has developed and would launch a missile that can strike the mainland United States but officials and experts believe it is some time away from mastering all the necessary technology, Reuters indicated.

For: North Korea displays military might as US deploys military arsenal in the region