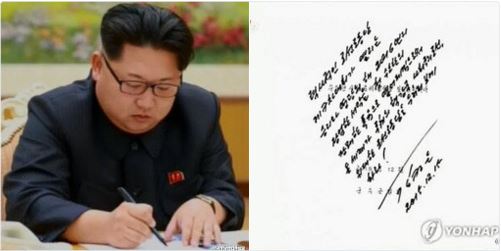 An image purporting to show Kim Jong-un’s hand-written text ordering the nuclear test has been published by South Korea’s Yonhap news agency and republished by the China’s People’s Daily.

Britain’s foreign office has issued a statement from Philip Hammond accusing North Korea of a “grave breach” of UN resolution.

In a addition to his remarks to journalists (see earlier) the foreign secretary said:

“If a nuclear device has been detonated by North Korea, this is a grave breach of UN security council resolutions and a provocation which I condemn without reservation.

“It underlines the very real threat that North Korea represents to regional and international security.

“We will be working with other UN Security Council members to ensure the international community responds urgently and decisively to this latest activity.”

“I have discussed this matter today in Beijing with my Chinese counterpart, State Councillor Yang Jiechi, and we have agreed to work with other members of the UN Security Council towards a robust international response.”

The UK’s former ambassador to North Korea has described the nuclear test as “deeply worrying” and warned that Pyongyang could launch a nuclear strike.

Speaking on BBC Radio 4’s Today programme John Everard, said: “Anything that produces a seismic shock of 5.1 is dangerous … an explosion of that size is quite enough to wipe out a city, and that of course is deeply worrying.”

Everard warned that Pyongyang’s leaders believed they could survive a nuclear counterstrike by sheltering in tunnels.

He said: “North Korea has a defensive tunnel system that makes the Tora Bora look like a child’s play pen in comparison. If they believe they can hide away in their tunnels and survive a nuclear counterstrike, the possibility that they could launch a nuclear first strike remains.”

Asked whether he believed that North Korea would seriously considered a nuclear strike, Everard said: “Yes, because the North Koreans have a deep sense of victimhood – that they are aggrieved by the international community. They also have a warrior tradition which would mean that they would probably prefer to go down fighting rather than be absorbed by South Korea.”

Everard also claimed that relations between China and North Korea have become so strained over nuclear weapons that Beijing could side with the international community in condemning the test. “It looks like the China/North Korea love in has soured very quickly. The Chinese have said they will cooperate with the international community in the denuclearisation of the Korean peninsula and I have a hunch, that when the UN security council meets later today that, we will see a rather different Chinese attitude from the one that we seen in the past.”