US President Barack Obama is to widen background checks on buyers of firearms, in a series of measures to address gun violence.

The plans will be announced on Tuesday by the president, despite opposition from Congress to new gun laws.

All sellers who operate online or at gun shows will be forced to conduct background checks on potential buyers.

And several of his Republican rivals said they would erase the measures “on day one” if they win the White House.

But Mr Obama says his new measures will be within his legal authority and consistent with the Second Amendment, which grants Americans the right to bear arms.

And while they will not solve every violent crime in the US, he said, they will potentially “save lives and spare families the pain” of loss.

Under the plan announced on Monday evening by the White House: 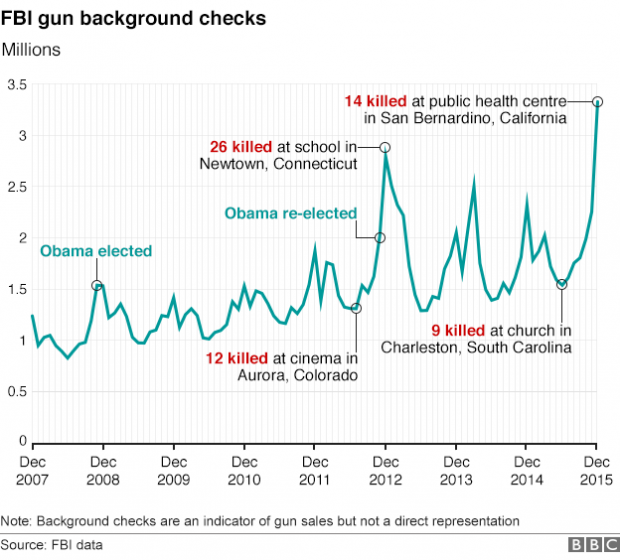 He told the BBC last year his failure to pass effective gun laws was his biggest regret.

The Republican speaker of the House of Representatives, Paul Ryan, accused President Obama of “dismissiveness” towards Americans who value the right to bear arms.

“This is a dangerous level of executive overreach, and the country will not stand for it,” he said in a statement.

One charming man I spoke to had a stall of fine old pieces, including a Remington rifle from the 1970s. Because he wasn’t registered, all I had to do was show him a driver’s licence – and answer this question: am I a felon or mad?

Say no to that, and all I had to do was hand over the cash and the gun was mine with as much ammunition as I could carry. And as he pointed out to me, if I lied, how would he know?

There were also individuals walking around the show carrying rifles and revolvers, with flags coming out of the muzzle saying “for sale” – again no restrictions at all for people who just wanted to flog their old firearm.

These are some of the issues that the president wants to address with his executive action.

For: Obama acts tough over US gun laws