Obama and Putin sit in “a blunt candid, and business-like” meeting on Syria 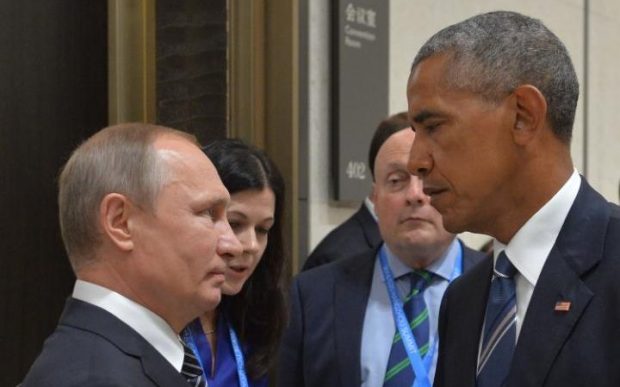 US President Barack Obama and Russian President Vladimir Putin had a tense meeting on the sidelines of the G20 summit on Sunday in a bid to resolve the ongoing crisis in Syria.

The pair spoke for more than 90 minutes in what Obama described as a “candid, blunt, business-like meeting”. However, they could not reach a deal to ease fighting in the war-torn region.

Both America and Russia have been on opposing sides of the five-year long civil war that has led to hundreds of thousands of Syrians being killed, internally displaced and forced to leave the country.

Russia has shown support for the Syrian government, while America has bolstered pro-democracy and Kurdish groups on the ground in its campaign against the Islamic State (IS) group.

The hostilities reached a flashpoint when Obama nearly launched air strikes against the Syrian government in 2013 after evidence emerged of sarin gas being used against civilians living in the Damascus suburb of Ghouta. However, plans for air strikes were rescinded after an agreement was negotiated by Russia for the Syrian government to destroy its stockpile of chemical weapons.

The unofficial meeting between Barack Obama and Vladimir Putin had been highly anticipated, with many commentators hoping the discussion would lead to solutions being drawn up to end the civil war.

Behind the scenes Secretary of State John Kerry and Russian foreign minister Sergey Lavrov had been trying to broker a deal for weeks that would curb the violence between Assad’s government forces and rebel forces backed by the US.

Numerous commentators and outlets described the body language of Putin and Obama as tense and standoffish during the meeting.

Despite this, both leaders described what will probably be their last encounter as productive, as Obama prepares to hand his presidency to Donald Trump or Hillary Clinton.

For: Obama and Putin sit in “a blunt candid, and business-like” meeting on Syria