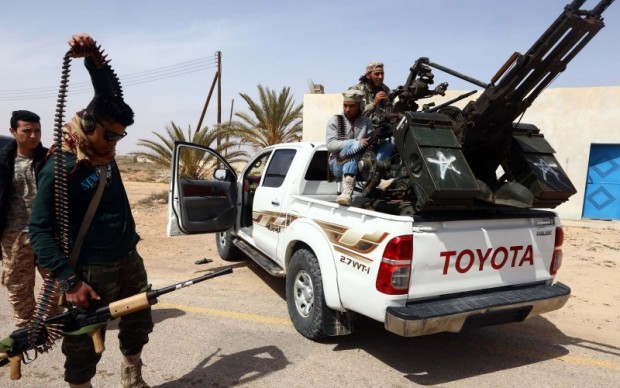 The terror group is gaining ground in Libya. But the Obama administration has said no to a Pentagon plan to go after ISIS there.

Despite the growing threat from the self-proclaimed Islamic State in Libya, the Obama administration has turned down a U.S. military plan for an assault on ISIS’s regional hub there, three defense officials told The Daily Beast.

In recent weeks, the U.S. military—led by its Africa and Special Operations Commands—have pushed for more airstrikes and the deployment of elite troops, particularly in the city of Sirte. The hometown of former Libyan leader Moammar Gadhafi, the city is now under ISIS control and serving as a regional epicenter for the terror group.

The airstrikes would target ISIS resources while a small band of Special Operations Forces would train Libyans to eventually be members of a national army, the officials said.

Weeks ago, defense officials told The New York Times that they were crafting military plans for such strikes, but needed more time to develop intelligence so that they could launch a sustained air campaign on ISIS in Sirte.

But those plans have since been put on the back burner.

“There is little to no appetite for that in this administration,” one defense official explained.

Instead, the U.S. will continue to do occasional strikes that target high value leaders, like the November drone strike that killed Abu Nabil al-Anbari, the then-leader of ISIS in Libya.

“There’s nothing close to happening in terms of a major military operation. It will continue to be strikes like the kind we saw in November against Abu Nabil,” a second defense official explained to The Daily Beast.

The division over what action the U.S. and the international community should take in Libya speaks to the uncertainty about when and where ISIS should be countered.

For Europe, Libya is uncomfortably close and already a jumping off point for migrants willing to take on the rough Mediterranean waters in search of asylum. ISIS pronouncements have previously pointed out that Rome is nearby.

For the United States, there are major concerns about allowing another ISIS hub to emerge in the region. The Libyan city of Sirte is currently under ISIS control and some believe the terror group seeks to turn Sirte into a center of operations, like Raqqa in Syria and Mosul in Iraq.

Leaders across Europe have hinted that more should be done in Libya but have fallen short on specifics. In an interview with Der Spiegel last month, the German envoy to Libya said: “We simply cannot give up on Libya.”

According to U.S. military figures, there are roughly 5,000 ISIS fighters in Libya, a spike from 1,000 just a few months ago. Defense officials believe that ISIS supporters are moving toward Libya, having found it increasingly difficult to travel to Iraq and Syria.

Perhaps because of that, Sirte, and areas around it, are increasingly falling victim to ISIS’s barbaric practices. And some are urging the international community not to wait until Sirte falls further under ISIS control, and filled with fighters mixed in with civilians.

According to this report, residents there cannot leave the city freely as ISIS fighters—many of them from Egypt, Chad, Niger, and Tunisia—inspect outgoing cars for signs of residents trying to escape. As in Raqqa and Mosul, residents do not have access to cell phone or Internet networks and live under an ISIS judicial system that issues death sentences to those who do not practice the terror group’s brand of Islam.

Moreover, in nearby cities like Ras Lanouf, ISIS is destroying oil installations, cutting off a key potential source of revenue for any newly cobbled unified Libyan government. ISIS has set its sights across the country, from Misrata in the west to Derna in the east.

Some fear the terror group is hunkering down in places like Sirte in preparation for a potential U.S. offensive.

The administration had said that it would not intervene until Libya, which now is governed by two rival governments on opposite sides of the country, had created a single entity to govern the state.

At a press conference Tuesday, during this year’s summit of the Association of Southeast Asian Nations, President Obama referred to United Nations efforts to help build a government in Libya, suggesting any military effort could create even more political fractures. On Sunday, a member of Libya’s Presidential Council announced that a list of 13 ministers and five ministers of state had been sent to Libya’s eastern parliament for approval.

But while the president said the U.S. would go after ISIS “anywhere it appeared,” he stopped short of saying the U.S. would expand its effort in Libya unilaterally.

“We will continue to take actions where we’ve got a clear operation and a clear target in mind. And we are working with our other coalition partners to make sure that as we see opportunities to prevent ISIS from digging in, in Libya, we take them. At the same time, we’re working diligently with the United Nations to try to get a government in place in Libya,” the president said. “And that’s been a problem.”

Some military officials believe Obama feels that France and Italy, which both have hinted at intervention, should take the lead on any military effort. Both countries were key to the NATO-led campaign in 2011 that led to Gadhafi’s fall. Still others believe the United States wants to limit its war against the Islamic State to Iraq and Syria.

Since Gadhafi’s death in October 2011, the state has become especially susceptible to outside extremists. With no tradition of an independently strong state military, militias have served as security forces and now are unwilling to disarm.

With no stable government or security forces, parts of Libya have become vulnerable to groups like ISIS looking for territory to set up a self-described caliphate.

As many as 435,000 of the country’s 6 million people are internally displaced, according a recent UN report. An estimated 1.9 million require some kind of humanitarian aid. And as of August, 250,000 migrants had entered, turning Libya into a key hub for those seeking to enter Europe.

Tuesday marked the five-year anniversary of Libya’s Arab Spring. It’s now considered a bittersweet day, rather than the beginning of a democratic movement the protests launched that day once promised.

For: Obama refuses to bomb ISIS in Libya’s Sirte