Over 2,000 immigrants rescued off Libyan coast 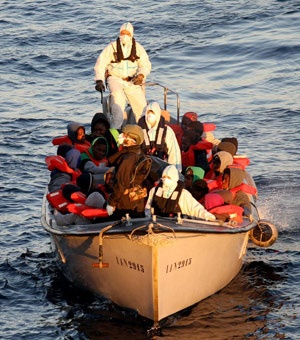 Nearly 2 000 migrants and two corpses have been recovered from people smugglers’ boats off Libya since Tuesday, Italy’s coastguard said on Wednesday.

The figures represent a pick-up in the flow of migrants attempting to reach Italy via Libya, a route through which around 330 000 people have made it to Europe since the start of 2014.

Prior to the latest rescues, the UN refugee agency (UNHCR) had reported 9 500 landing at Italian ports since the start of the year.

This compares with more than 143 000 who have reached Greek islands by crossing the Aegean Sea since January 1.

With efforts under way to close the entry route through Greece, Italian authorities are wary of a surge in the number of migrants attempting to come through Libya.

So far there has been no indication of that happening. Numbers arriving from Libya have always fluctuated in line with weather conditions in the Mediterranean and other factors.

Arrivals were slightly down in 2015 compared with 2014 – a trend that may be related to the political chaos in Libya which might have deterred some migrants and has also made it harder for those that do make the journey to find work there while awaiting boats to Italy.

For: Over 2,000 immigrants rescued off Libyan coast