Over 25 people killed in Turkish airstrikes near Jarablus 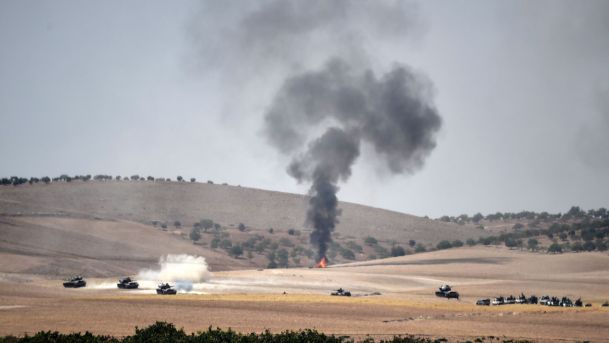 At least 25 people have been killed as Turkey continues to target Kurdish-held areas in Syria, near the border city of Jarablus.

The Turkish military said those killed in Sunday’s air strikes were Kurdish militants.

Separately, a monitoring group said at least 35 civilians and four militants were killed by a wave of Turkish strikes in the same area.

It is not yet clear whether the two reports relate to the same incident.

Speaking in Gaziantep, where IS militants killed 54 people at a Kurdish wedding last week, President Recep Tayyip Erdogan said “operations against terrorist organisations will continue until the end”.

Turkish tanks and troops backed by Syrian rebels have captured territory from IS and clashed with the Kurdish People’s Protection Units (YPG), a Kurdish militia supported by the United States, which is itself fighting IS.

For: Over 25 people killed in Turkish airstrikes near Jarablus