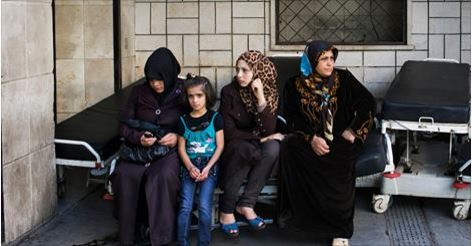 Fifty-six women and girls are believed to have travelled to Syria from the UK last year, police said as they released a video of female Syrian refugees asking why any woman would want to take her family to a war zone.

The latest figures from national counter-terrorism police showed women and girls were continuing to travel to Syria in worrying numbers. Figures released last July showed 43 females were thought to have gone to Syria in the previous 12 months.

“We are deeply concerned about the numbers of girls, young women and also families who are taking the decision to go to Syria, unaware of the dangers they face when they arrive and the fact that they are unlikely to ever be able to return home to their devastated wider families,” said Helen Ball, deputy assistant commissioner.

About 4,000 westerners are thought to have joined Islamic State, including 550 women. In February, three London schoolgirls – Shamima Begum and Amira Abase, both 15, and Kadiza Sultana, 16 – went to Syria. Some are now thought to be married to Isis extremists.

The short film released by the police in association with the charity Families Against Stress and Trauma (Fast) aims to counter Isis recruitment propaganda aimed at young girls and women in the west. It features three Syrian female refugees speaking in Arabic with subtitles.

“We were living under very bad circumstances and it was getting worse by the day,” says Fatten, one of the three refugees. “My son couldn’t get the medical treatment he urgently needed.”

Isaaf says: “Your children are now living in security (in Britain), are provided with schools, a nice life and beautiful future. So why are you taking them to a war zone?”

Zakaa adds: “I would like to say to women who want to go to our country that it is the wrong place to bring up children.”

The film is accompanied by open letters the women have written urging mothers in the UK to take steps to prevent their daughters travelling to Syria. The film is part of a wider campaign by counter-terrorism police to encourage women and mothers to play their part in preventing their children from travelling to Syria.

“The personal accounts of the women in this film highlight the harsh reality of life for women and children living in a war-torn country,” Ball said. “I hope they will go some way to helping young women and mothers stop and think about the huge mistake they would be making if they travel.”

The police said the importance of the role of mothers in deterring other family members from travelling was highlighted by an online survey. Asked to which family member they were most likely to talk if they were worried about someone they knew being radicalised or considering travelling to a conflict zone, two-thirds (66%) of 11- to 25-year-olds said they would speak to their mother.

A joint report by the Institute for Strategic Dialogue and the International Centre for the Study of Radicalisation at King’s College London said in May that counter-terror programmes aimed at preventing the increasing number of girls and women joining were too few, ill-informed and under-resourced and should be urgently scaled up.

The report said the women did not join with the intention of becoming “jihadi brides”, but often ended up facing “harsh realities”. It also said recruits were increasingly younger and came from comfortable and educated backgrounds.

Women were not passive agents, it said, with some involved in aspects of Isis life including propaganda and recruitment. But it suggested that, whatever women’s reasons for joining, their “first and foremost” responsibility would be “to be a good wife to the jihadist husband to who they are betrothed and to become a mother to the next generation of jihadism”.

In September, a mother thought to have been planning to travel to Syria with her four children was arrested after returning to the UK. Zahera Tariq, 33, was detained in Turkey along with her sons Muhammad, 12, Amaar, 11, Aadid, four and daughter Safiyyah, nine.