Over 700 immigrants rescued off Libyan coast by Italian coastguards 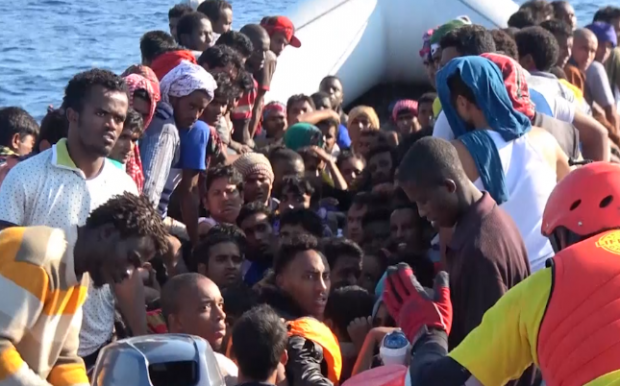 Over 700 immigrants escaping war-torn Libya have been rescued in the Mediterranean sea Monday.

Refugees fleeing the troubled country on small inflatable dinghies were rescued by emergency teams as they sailed toward the Italian coast, about 17 miles north of Sabratha, Libya, earlier this morning.

Members of Proactiva Open Arms NGO, a group set up to help rescue migrants at sea, helped pull them from their inflatable boats before handing them over to the Italian coastguards operating in the area.

Thousands of migrants try each year to flee Libya and make it to Italy but many drown during the crossing.

They cram into boats that are small and unsafe for the 190-mile perilous journey from Libya’s shores. A total of 4,027 migrants and refugees have perished since

January trying to flee wars and poverty looking for a better life mainly in Europe, the International Organisation for Migration said last week.

Of that total, some 3,120 died trying to cross the Mediterranean Sea, including 120 who drowned off Libya’s coastal town of Sabratha at the end of July, it said.

For: Over 700 immigrants rescued off Libyan coast by Italian coastguards