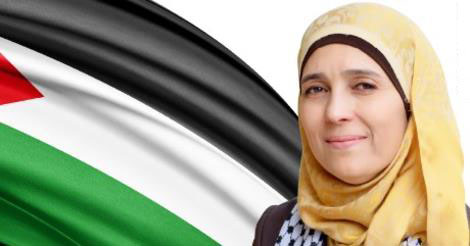 An elementary teacher who grew up in a Palestinian refugee camp has won a $1 million prize recognizing the “outstanding contribution” she has made to her profession.

Hanan Al Hroub, from Bethlehem in the West Bank, was awarded the Global Teacher Prize at a ceremony in Dubai Sunday.

Hroub accepted the award “as a win for all teachers in general and Palestinian teachers in particular.”

Hroub became a teacher after her children and husband were shot at on their way home from school. “It transformed my children’s behaviors, personalities and academics,” she says in a video. “I felt that I was alone in getting my children through this. No teachers had helped us get my children back on track. ”

With no help forthcoming from the education system, Hroub says her family started inventing games at home and inviting their neighbors’ children to participate.

Gradually, the children’s behavior and grades began to improve, she says. Now she teaches using play and learning at school to help pupils reject violence.

‘Our goals are noble’

“Some children may not directly experience things like arrests, or assault, checkpoints and all the violence in our country, however they see it on the screens and in social media and that still affects them,” Hroub says.

“I tell all the teachers, whether they are Palestinian or around the world: ‘Our job is humane, its goals are noble. We must teach our children that our only weapon is knowledge and education’.”

Congratulations to @Hanan_Hroub for winning the Global Teacher's Prize. Your dedication to traumatized children is an inspiration to all.

Pope Francis announced via video conference that Hroub had won the award.

The Pope said that part of education was teaching children how to play in order to learn how to be social and “learn the joy of life.”

“I would like to congratulate the teacher Hanan Al Hroub for winning this prestigious prize due to the importance that she gave to the role of play in a child’s education,” Francis said.

It is the second year the prize has been awarded. The inaugural winner was Nancie Atwell, from Maine in the U.S.

Atwell was recognized for “her constant innovation over 40 years of teaching, striving to cultivate global citizens in the classroom, and being a leader in the field of education.”

A global panel that includes educators, entrepreneurs and scientists is responsible for choosing the winner.

The award was created by the Varkey Foundation. The not-for-profit organization — founded by Dubai-based education entrepreneur Sunny Varkey — aims to “improve the standards of education for underprivileged children throughout the world.”

China: The United States should react positively to Iran on the nuclear deal