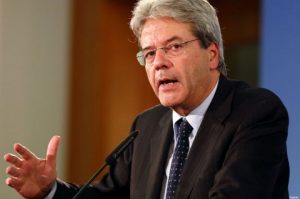 The Italian Foreign Minister, Paolo Gentiloni, said Tuesday that the attacks on oil ports of Essidra, Brega, Zueitina, and Ras Lanuf, by the forces of Dignity Operation led by Khalifa Haftar, are going to badly affect the Libyan political process and hence destabilize Libya, shelving the peace process for good.

Speaking at the Italian Parliament, Gentiloni said there are headquarters of international oil companies at the petroleum facilities in the oil crescent region including Italian ones, which was attacked by Khalifa Haftar’s forces, “and that is why the situation is very unstable” he added.

The US, the UK, Italy, Germany, Spain and France issued a joint statement on Monday condemning the Khalifa Haftar-led Dignity Operation attack on oil ports in the oil crescent region on Sunday, calling on both parties to immediately cease fire and stop any violent acts that can destroy or sabotage the facilities plunging Libya into a dilemma regarding ever exporting oil again.

Like western countries, the Presidential Council of the GNA also denounced the attack on the oil terminals and issued a statement calling on the defense minister of the GNA, Mihdi Al-Barghathi to thwart the assault and hinder the Dignity forces from obtaining Libyans’ oil ports, adding that there are foreign fighters, mainly from Sudanese Justice and Equality rebel movement, and Chad, who are fighting alongside Dignity forces to try and control the main resources of the Libyan state and people.