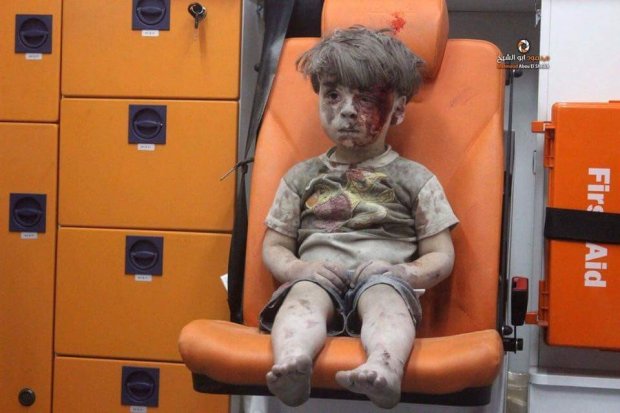 Syrian activists have released striking pictures of a young boy rescued from a destroyed building after an air strike in the divided second city of Aleppo.

Video and photos of the boy sitting dazed and bloodied in an ambulance were shared widely on social media, with many expressing shock and outrage.

A doctor identified him as Omran Daqneesh, 5, who they said was treated for head wounds on Wednesday night.

It was not immediately clear what happened to the rest of his family.
Fighting between Syrian government forces, backed by Russian air strikes, and rebels has escalated in Aleppo in recent weeks, reportedly leaving hundreds of people dead.

The pro-opposition Aleppo Media Centre said the pictures of the boy were taken in the rebel-held Qaterji district of Aleppo on Wednesday, after air strikes that left three people dead and 12 injured.

The video shows the boy being carried out of a damaged building by a medic and then placed on a seat in the back of an ambulance, covered in dust and with a blood-covered face.

For: Photo of injured boy by Russian airstrikes on Aleppo sparks outrage