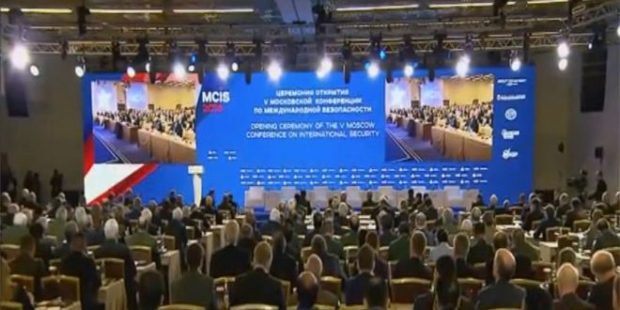 Russian President Vladimir Putin called for creating a wide anti-terrorist front on a universal international legal basis and under the auspices of the UN.

“Effective vigorous efforts of the whole world community are necessary to effectively fight against this global threat,” Putin said in an address to the participants of the fifth Moscow Conference on International Security.

He added that Russia’s operation against terrorism in Syria has created the appropriate conditions to push forward the intra-Syrian dialogue to reach a political solution for the crisis in the country.

For his part, Russian Foreign Minister Sergey Lavrov affirmed that Russia is the only country that was practical and realistic towards the crisis in Syria, pointing out that the steps taken by the Russian Aerospace Forces, in cooperation with the Syrian government’s forces, contributed to inflicting heavy losses upon terrorists, creating the conditions for the cessation of hostilities, delivering humanitarian aid to affected areas, and launching the process of the political settlement.

He added that Russian-American military cooperation allowed the two states to lead the efforts to resolve the crisis in Syria and form the International Syria Support Group (ISSG).

Lavrov voiced concern regarding the terrorist groups’ ability to use chemical weapons, calling for taking the necessary measures to prevent terrorists from using them.

He also reiterated that the political settlement for the crisis in Syria must be on the basis of the participation of all spectrums including the Syrian Kurds as per UN resolution no. 2254.

In turn, Russian Defense Minister Sergei Shoigu called on the international community to unite its efforts in the field of fighting terrorism on basis of Putin’s initiative.

Shoigu criticized any attempts to make deals with terrorists or categorize them as “good or bad” or to arm them to achieve political targets, describing theses attempts as criminal acts.

He noted that the Russian forces in Syria concentrate now on the political settlement and on providing humanitarian aid, affirming that they will continue destroying the economic base of terrorists.

For: Putin urges for forming a large-scale anti-terrorism front