The Whites overturned Piqué’s goal with a strike from Benzema and the decisive blow from Cristiano Ronaldo, which came when they were a man down.

Real Madrid won the Clásico after a spectacular second half which saw them overturn Piqué’s goal with a strike from Benzema and another from Cristiano Ronaldo when they were down to ten men after Sergio Ramos’ sending off. The first half was intense but finished goalless. Barcelona had the first chance in the 10th minute but Luis Suárez failed to convert just in front of goal after a cross from Messi.

Both teams were reaching the opposition area and the hosts had another chance in the 19th minute when Rakitic took advantage of a loose ball to hit a shot with his left foot, but Keylor Navas was more than equal to it and he saved at full stretch. The minutes passed and halfway through the first period Cristiano Ronaldo responded. The Portuguese, at that time operating from the right wing, cut inside on the edge of the area and shot with his left foot in the 25th minute, but Bravo beat it away with his fists uncomfortably. That wasn’t all though, as Benzema had the last opportunity of the half. His instinctive strike from the penalty spot in the 43rd minute failed to hit the target.

The second half began in just as exciting a manner. The visitors created the first chance with a quick counter-attack which ended with a corner after Benzema’s shot in the 51st. Five minutes later, the hosts were in front as Rakitic took a corner and Piqué scored with a header.

CRISTIANO RONALDO HAS SCORED TEN GOALS AT THE CAMP NOU.

They now had to come from behind in the Camp Nou, and the reaction was instantaneous, with a counter-attack as fast as it was deadly. Marcelo took the ball to the area, cut inside an opponent, kept hold of the ball, and saw Kroos arriving. The German’s cross in the 62nd minute struck a defender, Piqué failed to clear and Benzema beat Bravo with a scissor kick. It was all square again.

The goal hurt Barcelona and gave The Whites an enormous morale boost, and they could have gone ahead in the 68th minute if Bravo hadn’t been so sharp in stopping a Bale strike from the edge of the area. Real Madrid were finding space brilliantly and looking dangerous on the counter. The final stretch of the game carried on in this vein and Real Madrid undoubtedly looked more deserving of the victory. Indeed, in the 80th minute they scored thanks to a fantastic Bale header, but Hernández Hernández ruled it out, signalling a foul by the Welsh player on Alba. One minute later there was more bad luck for the visitors. Cristiano received the ball on the edge of the area and let off a spectacular strike that hammered off the crossbar.

These were the best moments for The Whites, who in the 83rd were down to ten men after Ramos’s sending off for a second yellow card. Even more difficult then, but impossible is nothing for Real Madrid and two minutes later they completed the comeback. Bale charged forward, sent the ball to the back post, where Cristiano Ronaldo did the rest. He controlled with his chest, bought the ball down and decided the Clásico with a shot that flew through Bravo’s legs. 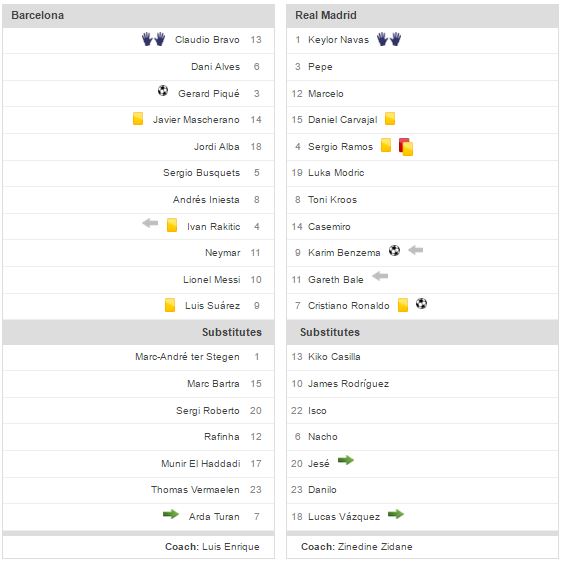