Three goals from the Welshman and a brace from Benzema sealed the thrashing of Deportivo and the fifth consecutive win at home.

Real Madrid under Zidane got underway with a thrashing against Deportivo. It would be impossible to ask for anything more from the French manager on his debut in charge of a side that dominated from the first minute onwards. The goalscorers were Bale, who notched up three and Benzema, who got a brace. In fact, Real Madrid already had the game well on track after barely 22 minutes. They opened the scoring after fifteen minutes. The goal came from a dead ball. Ramos shot following a corner and Benzema, paying close attention, changed the direction of the ball with a subtle backheel. In doing so, the Frenchman scored his 100th La Liga goal.

The Whites only needed seven minutes to extend their lead. The move was a work of art. Benzema opened on the wing and Carvajal sent in a measured ball to the head of Bale. The Welshman, a La Liga leader in that department, put the ball where it was out of reach for Lux. It is the British player’s fifth headed goal. The sixth was to come.

More chances to score
The score remained the same by half time, despite Cristiano Ronaldo twice coming close to getting the third goal. The first chance came in the 25th minute. He got the ball slightly out on the wing, faced up to his marker and sent a curling shot just centimetres wide of the visitor’s goal. The second chance was clearer. Bale controlled at the edge of the area, he saw that the Portuguese player had broken away from his marker in the 39th minute and sent in a measured ball to his head. The shot from the Real Madrid number seven hit the post.

“REAL MADRID ARE LA LIGA SIDE WITH MOST HEADED GOALS (11).”

The attacking storm did not ease up following the break, during which Varane came on for Ramos. In fact, within barely three minutes, the Whites got their third goal. The pass back from Cristiano Ronaldo was majestic and Bale’s left-footed first touch finish was even better. The fans that had come to the Bernabéu were enjoying the occasion with their team.

Bale hat trick
The Welshman was not satisfied with his brace, and 14 minutes later he got his hat trick. Like in last week’s game at the Mestalla, Kroos sent the ball into play from a dead ball situation and Bale, at the near post, rose before the rest to score with his head. It is the third game in which the British player has scored three or more goals for Real Madrid. The ovation from the Bernabéu as he left the pitch after being substituted for Jesé in the 74th minute was unanimous.

Benzema adds finishing touch to thrashing
In injury time, Bezema closed out the thrashing by finishing a counterattack started by Jesé. The way the ball hit the crossbar before going over the line added beauty to the goal with which the Frenchman sealed his brace. Zidane’s Real Madrid enjoyed a great first game. 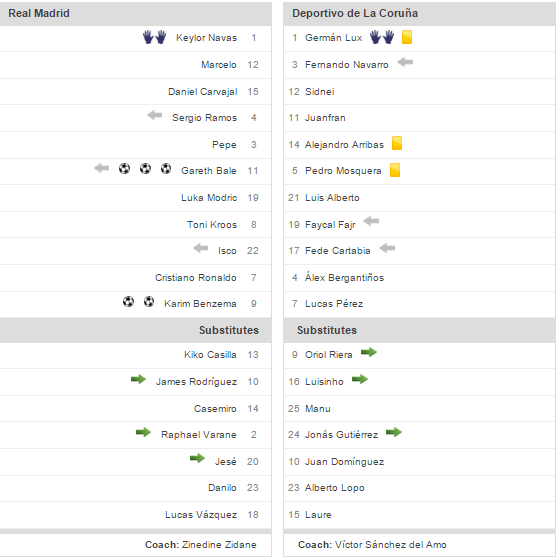 For: Real Madrid wins 5-0 over Deportivo in first Zidane-coached match