Reports: Haftar in Cairo, where he will be told to lay low regarding Sirte liberation 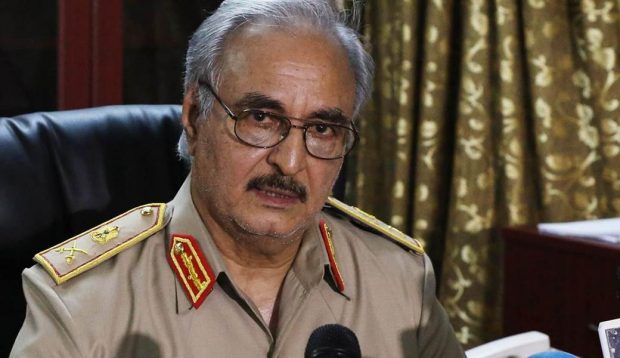 The newspaper said Haftar’s visit “aimed to coordinate efforts” with the Operation Room of Misrata, which was formed by the Libyan Government of National Accord (GNA) headed by Fayez Al-Serraj.

In addition, the sources said that there is an international agreement to delay political discussions between Al-Serraj and the Speaker of the Tobruk-based House of Representatives, Aqilah Saleh, provided that it would not affect military coordination regarding the liberation of Sirte.

“World powers agreed to carry out a large-scale attack on ISIS in more than one location at the same time in order to terminate its branches and the movement of its members,” the sources told Al-Araby Al-Jadeed.

They added that Cairo is going to tell Haftar that the international partners do not want him to carry out any individual operation without coordination with Al-Serraj’s government.

The sources reiterated that Washington does not have a problem with Haftar’s presence in the new Libyan government, but he must not be the main player.

For: Reports: Haftar in Cairo, where he will be told to lay low regarding Sirte liberation