Reports: US military advisers will be deployed in Libya to help GNA fight ISIS 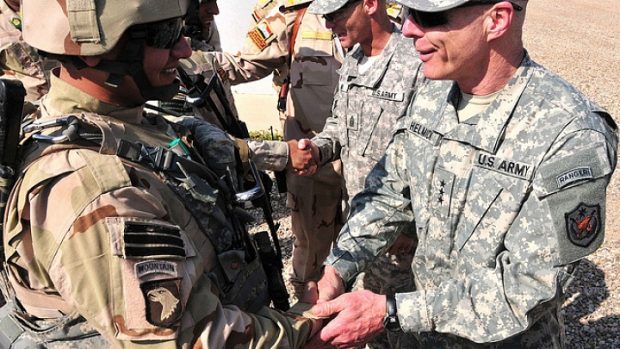 The U.S. military’s top general said Thursday that the Libyan government is in a “period of intense dialogue” that could soon lead to an agreement in which U.S. military advisers will be deployed there to assist in the fight against the Islamic State.

“There’s a lot of activity going on underneath the surface,” said Marine Gen. Joseph F. Dunford, chairman of the Joint Chiefs of Staff. “We’re just not ready to deploy capabilities yet because there hasn’t been an agreement. And frankly, any day that could happen.”

Dunford spoke to a handful of journalists while returning to the United States from Brussels, where he met with military chiefs this week from numerous NATO nations. There is interest among some NATO nations in participating in the mission, Dunford said, but the specifics of who and what would be involved remain unclear. The operation will likely focus on training and equipping militias that pledge loyalty to Prime Minister Fayez Sarraj, the leader of the new Libyan Government of National Accord (GNA), which is backed by the United Nations.

[Who in Libya will the U.S. send weapons to? It’s complicated, says a top general.]

“There will be a long-term mission in Libya,” Dunford predicted, adding that NATO will want a request from the new government in order to get involved.

A small number of U.S. Special Operations troops have been deployed to the Libyan cities of Misrata and Benghazi to assess who could be partners for U.S. forces since late last year, U.S. officials acknowledge. Dunford declined to comment on their operations Thursday, but said the United States is looking for ways to make “a unique contribution” to the effort.

The advising mission could be complicated by not only security concerns, but political ones. Sarraj’s government has not yet been accepted by either existing rival government in Libya, the Tripoli-based General National Congress (GNC) and the elected House of Representatives in the eastern part of the country. He also appears to be counting on support from militias in Misrata and forces loyal to Gen. Khalifa Hifter, a Libyan military officer who launched a campaign against the GNC and its Islamist links in 2014. The Misratans and Hifter’s troops have been known to square off against each other in armed clashes.

The coalition leadership structure for the Libyan mission also isn’t clear. Defense Secretary Ashton B. Carter said early this month that he anticipated the Italian government would take the lead in it. However, Italian Prime Minister Matteo Renzi has ruled out a large “invasion” of Libya, and reports emerged this week that Renzi was backing out of deploying troops in support of the U.N.’s support mission in Libya.

For: Reports: US military advisers will be deployed in Libya to help GNA fight ISIS