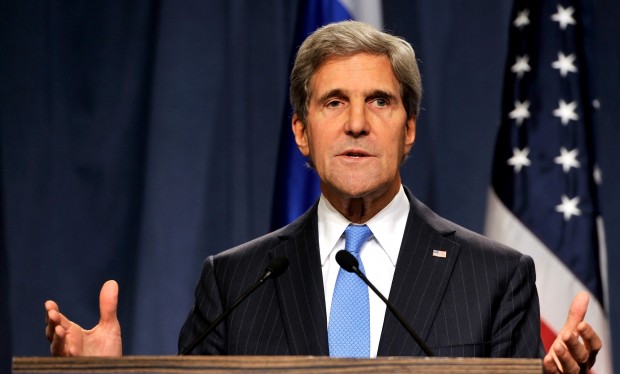 ROME — Secretary of State John Kerry said on Tuesday at a meeting here of the American-led coalition fighting the Islamic State that the group must step up its efforts to prevent the militants from gaining a “stranglehold” in Libya, where it has become a growing threat.

“We’re still not at the victory that we want to achieve, and will achieve, in either Syria or Iraq, and we have seen Daesh playing a game of metastasizing out to other countries, particularly Libya,” Mr. Kerry said, using an Arabic acronym for the Islamic State.

Mr. Kerry, opening a day of meetings devoted to planning the next stages of the battle against the Sunni extremist group, said the formation of a national unity government in Libya would prevent the Islamic State, also known as ISIS or ISIL, from seizing control of the country.

Warning that the stakes were high, he said, “The last thing in the world you want is a false caliphate with access to billions of dollars of oil revenue.”

President Obama and top officials in his administration have been meeting to determine how the United States will expand its offensive against the Islamic State, Mr. Kerry said, “and over time we will lay that out.”

Mr. Kerry also used the session, jointly hosted by Italy and attended by 21 other nations in the coalition, to plead for more financial help to stabilize recently liberated areas of Iraq and for a strong international effort to address the humanitarian crisis in Syria.

“The situation on the ground for the Syrian people is unfathomable — we haven’t seen a catastrophe like this since World War II, and it’s unfolding before our eyes,” Mr. Kerry said.

He said the government of President Bashar al-Assad of Syria was guilty of war crimes for failing to allow humanitarian access to towns where starvation is rampant, including Madaya, saying that Mr. Assad had granted only 13 of 113 United Nations requests for such access.

“Starvation as a tactic of war is against the laws of war, and it is being used every single day as a tactic by the Assad regime,” Mr. Kerry said, adding that there was an “urgent” need for the talks in Geneva to deliver a cease-fire, immediate humanitarian assistance and protection for civilians at risk from daily airstrikes.

Mr. Kerry’s remarks came amid reports of a government drive in northern Syria that threatened supply lines from Turkey to rebel forces in and around the Syrian city of Aleppo. In addition to aggravating the humanitarian situation, the new offensive, backed by heavy Russian airstrikes, threatened to render meaningless efforts by the United Nations in Geneva to hold talks on a political settlement.