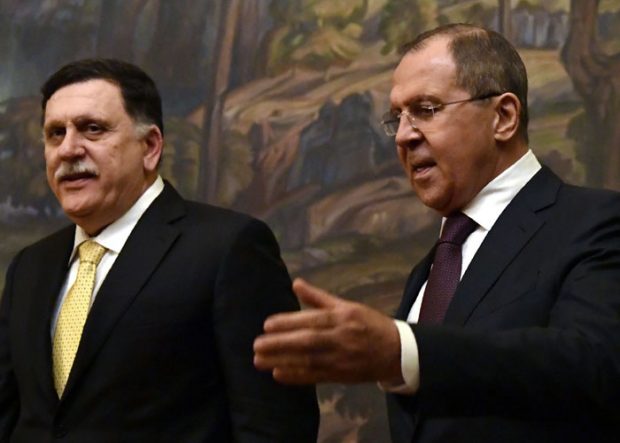 Russia’s foreign minister on Thursday pushed an “inclusive national dialogue” in Libya at talks with its UN-backed premier that came after his key rival sought to boost ties with Moscow.

“We are convinced that only the Libyan people themselves can overcome the current crisis, all the parties in Libya through an inclusive national dialogue aimed at reconciliation,” Russia’s Sergei Lavrov told Fayez al-Sarraj at the start of the meeting.

Lavrov described Moscow as an “old friend” of Libya and insisted it would “strongly advocate the need to create conditions for the Libyans themselves to resolve their problems”.

Sarraj’s Moscow trip comes as Libya remains in chaos, six years after the ouster and killing of longtime dictator Moammar Gddafi in the midst of a NATO-backed armed uprising.

Sarraj’s fragile Government of National Accord (GNA), formed under a United Nations-backed deal signed in late 2015, has struggled to impose its authority, particularly in eastern Libya where a rival administration holds sway.

Haftar has sought to bolster ties with the Kremlin to seek support for an end to a UN arms embargo, visiting Moscow in November and going onboard a Russian aircraft off the Libyan coast in January.

Last month dozens of Haftar’s fighters were flown to Russia for medical treatment in a sign of warming ties.

Analysts believe Russia, emboldened by its military success in Syria, is seeking a foothold in oil-rich Libya with support for Haftar.

On February 14 Russia tried to mediate a meeting between Sarraj and Haftar in Cairo, but the talks fell through.