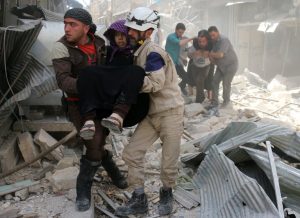 Russia has warned it could resume air strikes on “moderate” rebel groups in Syria unless the US does more to distance them from extremists.

A top official told the BBC there were “limits” to how long Russia, a key ally of the Syrian government, would wait.

Under a deal which has halted fighting in Syria, only so-called Islamic State (IS) and a group previously officially linked to al-Qaeda can be targeted.

Meanwhile, the UN is still waiting to be able deliver aid to besieged Aleppo.

Some 20 trucks have been waiting for safe passage to cross from Turkey into Syria and on to rebel-held east Aleppo since the cessation of hostilities came into effect on Monday.

The UN however says it has not yet received permits from the Syrian government to allow the trucks into opposition areas, where at least 250,000 people are in desperate need of food and medicine.

Russia said Syrian government troops had begun to withdraw from Castello Road on the outskirts of Aleppo – the route through which the trucks will pass – on Thursday but this has not been independently confirmed.

Syrian and rebel forces are meant to pull back from the road to allow aid convoys through as part of the US-Russian deal which led to the cessation of hostilities.

Russian Deputy Foreign Minister Mikhail Bogdanov told the BBC his country was confident that Syria would honour the ceasefire agreement but had “more doubts about the opposition”.

He said the US needed to do more to persuade “moderate” rebel groups to disassociate themselves from Jabhat Fateh al-Sham, which is the strongest jihadist rebel group and is excluded from the ceasefire.

If the cessation holds for seven days, the US and Russia have agreed to jointly plan attacks on Jabhat Fateh al-Sham, which was previously known as al-Nusra, and IS.

However, other rebel groups, many of them Western-backed, have shown no sign of separating from Jabhat Fateh al-Sham, to which they are strategically allied in some areas.

The US “have been promising to do the maximum possible to separate the moderate opposition from the Nusra Front since February”, when a previous cessation of hostilities deal was agreed, said Mr Bogdanov.

Since then, the US had been saying “just hold on”, he said. “We’re waiting, but there are limits,” the Russian official added.

Mr Bogdanov said the current deal was “the only plan on the table”. “We have no Plan B,” he said.