Schengen at risk of change after Amsterdam talks

EU governments have placed a large question mark over the future of Europe’s passport-free travel zone, signalling an extension of national border controls within the 26-country Schengen area in response to the immigration crisis.

As Europe scrambled to put together a coherent answer to the biggest challenge the union has faced, EU interior ministers meeting in Amsterdam on Monday compounded a sense of gloom and confusion in the face of ever rising numbers of people heading into Greece from Turkey.

Klaas Dijkhoff, the Dutch migration minister, said the governments were to ask the European commission for permission to extend and prolong the border controls from May because the numbers of refugees reaching Europe were not diminishing.

Under the rules governing the open travel area, governments could suspend the Schengen system for two years, dealing a potentially terminal blow to a scheme that has been in place for more than 20 years. “These measures are inevitable at this point in time,” said Dijkhoff of the likely suspension.

Following eight hours of talks in the Dutch capital, the Austrian interior minister, Johanna Mikl-Leitner, said: “Schengen is on the brink of collapse.”

In the past week, national leaders and senior EU officials have made increasingly alarmist pronouncements on Schengen’s future, warning that the travel zone could crumble within weeks and bring with it the risk of union dissolution.

The countries bearing the brunt of the mass influx of more than 1 million asylum seekers in the past year rounded on Athens, with Austria bluntly dismissing Greek arguments and warning that it could be kicked out, at least temporarily, of the Schengen area. Germany and Sweden echoed the criticism. Between them, the three countries have taken in about 90% of asylum seekers over the past year, but are reining in their liberal admissions policies.

Vienna last week triggered a chain reaction of curbs on refugee movement by announcing plans to cap the numbers allowed in over the next four years. Sweden has already imposed stringent national border controls and Germany is mulling whether to suspend Schengen for two years. 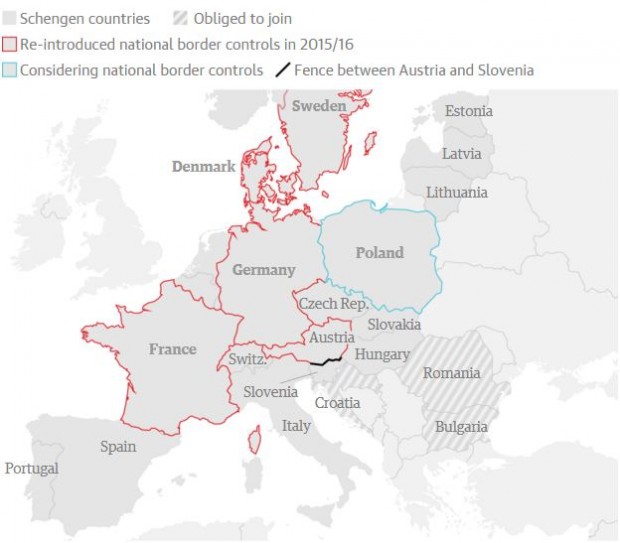 Mikl-Leitner rejected Greek arguments about the difficulties of patrolling its maritime borders with Turkey and explicitly warned Athens about a Schengen expulsion. “Greece has one of the biggest navies in Europe,” she said. “It’s a myth that the Greek-Turkish border cannot be protected.”

The Swedish home affairs minister, Anders Ygeman, said of Greece: “If a country doesn’t live up to its obligations, we will have to restrict its connections to the Schengen area.”

EU governments have been seized by a rising sense of panic, desperate for the numbers of arrivals to slow down while all the evidence points in the opposite direction. About 35,000 have made the sea crossing from Turkey to Greece since the beginning of the year, a 20-fold increase on the same period last year.

“We don’t have any good options, only bad options on the table,” said a senior diplomat in Brussels. “This simply can’t continue. There’s agreement among the member states on that.”

Meanwhile, as the numbers arriving via Turkey have shown little let-up, three EU commissioners were in Ankara in what has turned into quasi-permanent negotiations with the Turkish government aimed at getting them to stem the flow.

The EU-Turkey pact shows little sign of delivering and the EU also cannot agree on how to fund the €3bn (£2.3bn) price tag promised to the Turks, although Germany wants to pay Turkey more. A joint statement from the German and Turkish governments following Berlin negotiations last Friday referred to the €3bn bill as merely a “first” payment.

Pressure on Greece also highlighted further divisions in an EU riven several ways over the refugee crisis. Italy, Luxembourg and the European commission all talked down the prospects of punishing Greece or expelling it from the Schengen system.

“There is no plan to exclude Greece from anything,” said Natasha Bertaud, the commission spokeswoman on immigration. She confirmed, however, that an EU mission was in Macedonia last week exploring how to strengthen the vulnerable country’s border with northern Greece.

Following Austria’s announcement of immigration curbs, countries on the Balkan route between Greece and Austria have followed suit, meaning that hundreds of thousands could end being kettled up in Greece unless there is an EU policy breakthrough.

Although the EU’s border agency Frontex has no mandate to operate in Macedonia, member governments have sent a total of 57 police and immigration officers to the country.

Athens responded angrily to the pressure. The migration minister, Yiannis Mouzalas, said Greece was being scapegoated in an EU “blame game”. “The European crisis will be a humanitarian crisis in Greece with thousands of trapped refugees and migrants,” he warned.

Greek officials pointed out that they have so far spent €2bn managing the migration wave. “That’s money we really don’t have,” said one. “Tell me: where’s the European solidarity?”

The Syriza-led government says that ringfencing the eurozone’s weakest link would be tantamount to turning it into a huge refugee camp at a time of acute social hardship.

Echoing those fears, analysts said suspension from the border-free zone could easily reignite scenarios of ejection from the single currency, which Athens only narrowly averted last summer. “It’s a symbolic act,” said economics professor Theodore Pelagidis, a fellow at the Brookings thinktank. “It would be interpreted by investors that Greece could face the danger of being ejected from the eurozone in the not so distant future.”

Regional experts said next month’s EU summit between heads of state would be critical. By then, officials deployed by Brussels will have completed a Schengen evaluation report expected to play a decisive role in determining whether Greece should remain in the zone.

“The February meeting will give us a better sense of whether the EU-Turkey deal is delivering,” said Mujtaba Rahman, head of European analysis at Eurasia group, a risk consultancy. “The real power lies in Germany. For Merkel, it is really important to deliver a substantial reduction in refugee numbers by the time of local state elections in mid-March,” he said.

There was a widespread perception, he said, that Greece had not done enough to process migrants properly, including setting up camps or hot spots where refugees could reside before their relocation. “Germany and others have become very frustrated with the lack of progress,” he said. “Now they are at risk of having a solution imposed upon them.”

For: Schengen at risk of change after Amsterdam talks