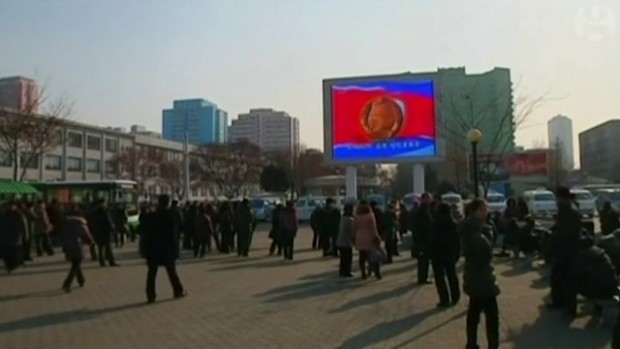 South Korea has said it will resume the cross-border propaganda broadcasts that Pyongyang considers an act of war, as fellow US ally Japan condemned North Korea’s claim to have successfully tested a hydrogen bomb as a “serious threat” to its national security. The broadcasts ratcheted up tensions between North and South Korea last year and the two countries traded artillery fire in August after Pyongyang demanded a halt.

The rivals negotiated an end to the standoff with an agreement to improve ties but a senior presidential national security official, Cho Tae-yong, said in a statement on Thursday that the test was a “grave violation” of the agreement. “Our military is at a state of full readiness, and if North Korea wages provocation, there will be firm punishment,” he said.

Seoul also began talks with Washington that could see the arrival of nuclear-powered US aircraft and submarines to the Korean peninsula.

In a phonecall on Thursday morning, the US president, Barack Obama, and the Japanese prime minister, Shinzo Abe, agreed that North Korea’s actions constituted a threat to stability in a region already nervous about Chinese military expansion.

Abe told Obama a “firm global response” was needed, as the UN security councildiscussed punitive action against the regime.

Obama reaffirmed the US commitment to Japan’s security, the White House said in a statement, adding that the two leaders “agreed to work together to forge a united and strong international response to North Korea’s latest reckless behaviour”.

Obama also spoke to the South Korean president, Park Geun-hye, during which the two leaders discussed the deployment of US strategic assets on the divided Korean peninsula, a South Korean military official told Reuters.

Whether or not it involved a powerful hydrogen device, Wednesday’s nuclear test has raised the likelihood of tighter bilateral sanctions by Japan. It will also be seized on by hawks in Tokyo as justification for a wider military role for Japanese troops.

Japan is already within range of conventional North Korean missiles – Pyongyang test-fired a Taepodong missile over its territory in 1998 – and there is growing alarm at the possibility that the regime is close to developing a nuclear warhead small enough to be mounted on a missile.

The Japan Times quoted a senior official in Tokyo as saying that a North Korea armed with a new nuclear weapon would expose Japan to its “biggest threat”.

“The North seems to be highly unpredictable now. That’s scary,” the unnamed official told the paper.

Experts, though, have questioned North Korean claims that the test involved a hydrogen bomb. On Thursday, South Korea’s defence ministry said it did not believe that North Korea’s test of an enhanced nuclear fission device was successful, according to the Yonhap news agency.

In response to Wednesday’s test, South Korea is to limit entry to the Kaesong industrial complex it jointly operates with North Korea, the unification ministry in Seoul said. Other cross-border initiatives will also be halted, Yonhap added.

The country’s defence minister, Han Min-koo, said the nuclear test was an “unpardonable provocation seriously threatening peace and stability in the entire Asia-Pacific region and the Korean peninsula”.

Han said he and the US defence secretary, Ashton Carter, had agreed during a phonecall on Wednesday night that North Korea should “pay a corresponding price for the provocation”.

After North Korea last tested a nuclear device, in 2013, Washington sent a pair of nuclear-capable B-2 stealth bombers on a sortie over South Korea in a show of force. But South Korea said it was not considering a nuclear deterrent of its own.

Despite its anger over the test, China is thought to be reluctant to punish its neighbour with too much economic pressure for fear of triggering a potentially catastrophic collapse.

The North Korean nuclear question was so complex that the “carrot-and-stick policy” of sanctions and aid remained the most sensible option in the short term, said Caixin, a respected Chinese magazine.

As a non-permanent member of the UN security council, Japan added its voice to calls for new multilateral measures against North Korea overnight, but is also expected to examine fresh bilateral sanctions.

“Taking into account North Korea’s reactions and the reaction by the international community, we would like to consider responding firmly to North Korea,” Yoshihide Suga, the chief cabinet secretary, told reporters.

Tokyo imposed sanctions against North Korea after it test-fired ballistic missiles in 2006. The measures include a trade embargo and bans on chartered flights and on North Korean ships entering Japanese ports.

Japan relaxed some of the sanctions last year after North Korea promised to investigate the abductions by Pyongyang agents of at least a dozen Japanese citizens during the cold war. Although five of the victims returned to Japan in 2002, Pyongyang claimed that the remainder had either died or never entered the country.

Relatives of the missing fear that the resumption of talks on the abductees’ fates will be almost impossible if Japan imposes another round of sanctions.

The US will also be looking to Japan and its other main ally in the region, South Korea, to coordinate a response to the latest provocation by North Korea. Tokyo and Seoul recently agreed to settle a long-running dispute over Japan’s wartime use of Korean women as sex slaves, partly in response to US pressure to shift their attention to North Korea’s nuclear weapons programme.

The US has 28,000 troops stationed in South Korea, and almost 47,000 in Japan, more than half of them on the southern island of Okinawa.

Heightened tensions in the region could lead to even closer cooperation between Japan and the US on missile defence, backed by a bolder security role for Japanese forces, analysts said.

“To counter North Korea’s aggressive behaviour and indirectly encourage China to do more, the United States and its allies must now work to strengthen missile defence shields in Japan and South Korea, speed up the rebalancing of US military assets to the Asia-Pacific region, and encourage the normalisation of Japan’s military,” said Jamie Metzl, a senior fellow at the Atlantic Council in Washington.

In September, Abe pushed through controversial security laws that remove some of the constitutional shackles on Japanese troops, potentially enabling them to fight overseas alongside US forces.

Washington had pushed for the change amid growing concern over Chinese naval activity and North Korea’s nuclear weapons programme.

For: Seoul and Tokyo resume cross-border propaganda against N-Korea