September 25, a new revolution in Libya 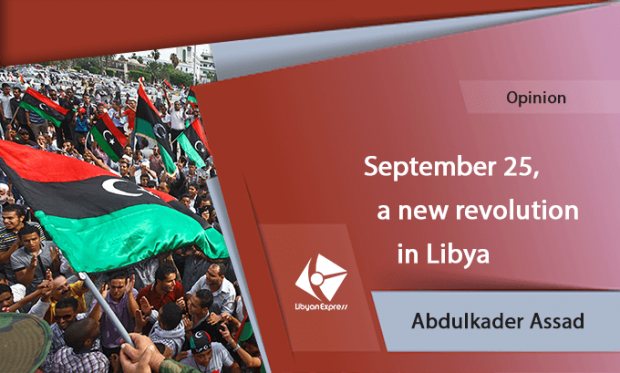 Libyans brace for a new wave of nation-wide protests on September 25 to go out in public squares and chant their demands as well as rights against the current governing bodies from east to west.

This new turning point is so reminiscent of the February revolution days, where all Libyans – let’s say most of them – were unified for the idea of protesting Gaddafi’s regime and toppling the old dictator over.

You can see Facebook, Twitter, Telegram, Instagram; and you name it, posts backing up calls for a protest mainly to be held at Tripoli Martyrs Square in Libya’s capital. Youths, elders, political figures who call themselves independent, activists; both social and political, and many others backed the calls for the September 25 protest.

On the ground, many Libyans were seen speaking about going out on September 25, others were seen placing papers with calls for it on their car windows, while several Libyans talked and had chitchat about the protests either face to face or on social media.

Mainly, a Libyan entrepreneur living in Switzerland by the name of Basit Igtet.

Igtet was an active figure at the start of the Libyan February revolution, then later on he was nominated for the post of Premier in Libya in 2014, however, he did not make it and stayed a bit distant from the media and the political scene throughout 2015/2016.

He started his call for September 25 protests, which he called a revolution on corruption, political opportunists, bad performance of all governments from the east to the west of the country as well as on the military and armed groups and militias across the whole country, with no exception.

He told off the Premier of the Government of National Accord for his lack of experience and bad command of the government, blaming him and the commander of the self-styled army in east Libya, Khalifa Haftar for the suffering of the people and the fall down of Libya’s economy.

Igtet criticized in his message the call of the Prime Minister of the Government of National Accord Al-Serraj for lifting the ban on importing weapons that is slapped by the UN. He said that Al-Serraj’s promise to lift the ban is irresponsible. Likewise, he criticized Haftar for causing banks in the eastern region in Libya a big loss of cash (about 20 billion), leaving the country on the edge regarding liquidity.

What is the promise of September 25

The main winning card that Igtet is using for his calls on Libyans to protest on September 25 is the living conditions and economic crisis in the country. He promised in one of his videos that he has the rights solutions and the right technocrats from Libya to implement them on the ground, promising to protect those who will rally in his support by international media coverage and local security forces.

He asked Libyans to go out for their rights and after that is done, they have to wait for change no more than 15 years with gradual improvements in all sections year in and year out.

He also talked about the fact that he will not allow Libya to be the playground of western intervention, mentioning the influence of Qatar, Egypt, UAE, France and Italy as well as Saudi Arabia on different parties in the country, however; he stressed that he will be backed by the US in his upcoming step, which left many questions marks among several observers.

No reaction from officials like Al-Serraj and Haftar as well as others like the House of Representatives’ Speaker Aqilah Saleh and the Head of the High Council of State Abdelrahman Al-Sweihli were given, however; the reaction came from security officials like the Tripoli Revolutionaries Brigade’s commander, Haithem Al-Tajouri, who after rejecting the protest, said he is going to protect Libyans right for expression and freedom of having peaceful protests.

With only three days to go, Libyans in support for September 25 demonstration and against it are awaiting the event in order to see to what degree Igtet will hold to his words, and to which direction Libyans can take matters, but most importantly to what extent the ordinary protesting Libyan citizens can make decisions for the fate of their country, although the decisions thy will make will be framed by Igtet and whoever is supporting him.

The views expressed in Op-Ed pieces are those of the author and do not purport to reflect the opinions or views of Libyan Express.
How to submit an Op-Ed: Libyan Express accepts opinion articles on a wide range of topics. Submissions may be sent to oped@libyanexpress.com. Please include ‘Op-Ed’ in the subject line.
Libyarevolution
Share
Submit a Correction
Sign up for our Newsletter.

Berlin conference: a first step from war to peace

How the West and the UN Failed Libya

For: September 25, a new revolution in Libya